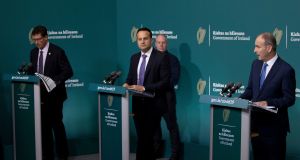 (From left to right) Minister for Transport Eamon Ryan, Tánaiste Leo Varadkar and Taoiseach Micheál Martin. A few weeks ago Ministers were looking forward to an autumn of cautious reopening. Photograph: PA

Last week’s Cabinet committee on Covid-19 had been dragging on for hours, as Ministers and senior officials grappled with the new reality that public health experts had presented to Government.

There was no doubt about it - Ireland, and Dublin especially - was experiencing a surge of coronavirus infections. Whether you called it the second wave or not, it was here, it was growing and they knew they would have to take action, and quickly.

And yet there was a reluctance, even in the face of the NPHET warnings, to re-enter shutdown.

With the schools open, the promised reopening of pubs, and the possibility of travel restrictions easing, people were looking at the return to some form of normality. Some Ministers and some officials present did not want to start moving in the opposite direction.

And so Minister for Finance Paschal Donohoe and Minister for Climate Change Eamon Ryan - both heavyweight figures in this Government - argued against new restrictions that would effectively shut down restaurants and pubs in the capital.

Both were worried about the economic and social consequences of heading back towards a lockdown. Some officials present looked to Tánaiste Leo Varadkar, expecting him to weigh in behind Ryan and Donohoe. But Varadkar stayed mostly silent.

It was Varadkar who led the last Government into the quick and total lockdown in March, emerging in the early summer to widespread public approval for his handling of the crisis.

Over the summer, he pushed for opening up the economy at a quicker pace. But now he wasn’t. “Leo has changed,” says one Government insider. “He’s a lot more cautious now.”

“He’s been looking at the data,” said another, “and he gets it.”

According to several people familiar with the discussions at the highest level, this is the mood across Government now. “What has tripped up the Brits is saying that things will be fine and then they turn out not to be fine,” says one person.

“We need to avoid that.” A few weeks ago, Ministers were looking forward to an autumn of cautious reopening. It might have been too much to call it optimism, but it wasn’t the opposite. Now it is. “It’s public health first now,” says one source. “The economy is just going to have to wait.”

In the last week or ten days, the political leadership has caught up with the public health experts. “Public health,” says one Cabinet source, “is back in the driving seat.”

This is the expectation now of Ministers, senior officials and people at the highest level of government.

This is what the autumn and winter look like: frantic assessments of local spikes, new restrictions, possible easing - they hope - if the mini-lockdowns are sufficiently observed, desperation to avoid the reimposition of a full national lockdown and the gnawing fear that it might ultimately be necessary.

Last week it was Dublin; this week it was Donegal. On Friday evening, Government announced that extra restrictions would apply to third level colleges. “I knew the colleges would be trouble,” groaned one senior official.

Next week it could be Cork and Galway. And Waterford and Limerick, adds a source.

In the UK, there is now talk of a “circuit-breaker” - a short return of the national lockdown in order to arrest the spread of the virus.

At least one senior Irish figure believes that will ultimately become inevitable here. The October mid-term break, the source says, is the obvious time.

Earlier this week a Swedish public health expert, Dr Johan Giesecke, expert told the Oireachtas committee the virus should be let spread in a controlled way, among people under 60.

In Sweden, there has been no massive lockdown like most other countries, and normal life - or at least more normal than elsewhere - has more or less continued. But Sweden has much higher death rates than its neighbours (though lower than several other European countries where lockdowns were instituted).

In any event, Ministers are not convinced. Nor are they convinced by calls for a “zero Covid” strategy to eliminate the virus completely and keep it out of the island. They believe Ireland cannot bear the shutdown required. So they continue to plough the middle way.

Even if Ireland will not adopt the Swedish approach, officials are keen to point to the wider European context. Spain and France are seeing huge surges in the virus; France had nearly 13,000 new cases on Thursday; Spain the same earlier this week.

Britain had its worst day ever on Thursday, with 6,178 new cases. The Czech health minister has resigned. Even in Germany, poster child for the management of the virus, cases have been ticking up in September.

If this isn’t Europe’s second wave, it’s something very like it.

On Thursday, the HSE launched its winter plan - with a budget 15 times larger than last year’s equivalent. Minister for Health Stephen Donnelly declared it was a “perfect storm” for the health system. In the day’s most obvious metaphor, however, Donnelly wasn’t actually at the launch. He has been unwell - he had a Covid test last week, which proved negative - and is working from home.

Donnelly has been under pressure in this most pressurised of jobs in the recent weeks. Always an outsider in the Fianna Fail parliamentary party, his colleagues have not exactly been rushing to defend him. “Donnelly fury in FF” shouted the page one headline of the Daily Mail on Wednesday, reporting unhappiness with the Minister’s performance.

In other ways, politics as normal is reasserting itself. Opposition parties, particularly Sinn Féin, are increasingly critical of the Government’s handling of the pandemic. Where back in spring the Opposition rallied around the flag, and the Government, the picture now is much more fractured. As it becomes clear that it will be the central question of public life for the foreseeable future, the pandemic is becoming another contested political space.

Nothing necessarily wrong with that - it is the Opposition’s job to question the Government - but it is unlikely to promote the sort of national consensus that has been evident in places where the pandemic has been successfully managed, such as Germany.

As if to emphasise the differences between Ireland and Germany, Berlin this week declared Dublin a “Covid-19 risk area”, requiring anyone arriving from the Irish capital to take a free Covid-19 test.

The Irish Times Berlin Correspondent Derek Scally has contrasted the situation between the two countries: in Germany, people are getting on with living with the virus without letting it dominate everything. In Ireland, there is an atmosphere of fear.

As of this week, there are a few more politicians among that number.