One-third of those patients subsequently died, according to a new study 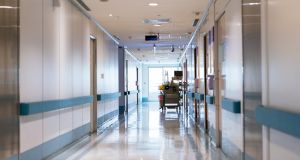 The research, which used sophisticated whole virus genome sequencing technology to track the virus, sheds a unique light on how it was transmitted within the hospital. Photograph: iStock

More than 50 patients were infected with Covid-19 during their admission to an Irish hospital in the space of two months earlier this year, and one-third of them died, according to a new study.

The research, which used sophisticated whole virus genome sequencing technology to track the virus, sheds a unique light on how it was transmitted within the hospital.

Most of the hospital-acquired cases were spread via healthcare workers, the team from UCD and St Vincent’s University Hospital concluded, as many of the mostly frail patients were either immobile or in single, en-suite rooms.

A number of changes put an end to the successive outbreaks that occurred, including testing of staff with only mild symptoms and then a widening of the requirement for staff to wear masks.

Transmission of the virus occurs from both symptomatic and asymptomatic healthcare workers to patients, according to the study published in Clinical Infectious Diseases journal, which recommends comprehensive screening of staff and universal use of surgical masks for all clinical care.

The hospital received its first Covid-19 patient on March 7th, and the first hospital acquired case was diagnosed on March 23rd, in a patient sharing a six-bed ward. In this instance and a second outbreak, transmission by staff was not established.

In three more outbreaks, most patients were in single accommodation, and some wards shared clinical staff.

At this point, in April, the criteria for testing for the virus among staff were widened and the hospital mandated surgical masks for all staff/patient interactions, though masks were not required in non-clinical areas.

There followed nine days without an outbreak, but on April 28th a new hospital-acquired case emerged, giving rise to the biggest cluster yet following a possible “superspreader” event. It involved a patient suffering from agitation who would wander up and down the corridor accompanied by his carer.

The patient was “unable to maintain physical distancing and characteristically would shout directly into faces of staff members passing by”. Ultimately, at least six staff and 11 patient contacts tested positive.

Staff reported often removing surgical masks in the nurses’ station when communicating with each other and replacing them again for patient interactions.

One member of staff who tested positive in this cluster had no direct patient contact, “indicating transmission may occur in non-clinical areas between healthcare workers”.

Overall, 52 patients were infected during their stay, most of whom required assistance with mobility and self-care. Most also had a ceiling of care established, so only three were admitted to ICU. Fourteen patients died “from complications of” Covid-19.

Most of the transmission spread via droplets and close contact, the authors conclude, as high dependency patients were shown to be at greater risk than independent patients sharing a room.