Covid-19: NI ministers urged to ‘get a grip’ amid wrangling over curbs 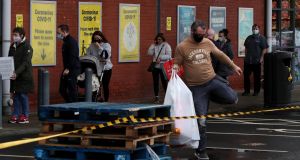 Stormont ministers have been warned to “get a grip of themselves” amid party political wrangling over curbing the spread of Covid-19.

Ulster Unionist MLA Doug Beattie said the North’s lockdown could have been over by next Friday, instead of being extended to December 11th, had the Executive shown more leadership.

“Our ministers really need to get a grip of themselves, they need to start working as one,” he told BBC NI’s Sunday Politics.

“There needs to be a single message coming out of our Executive. What they need to stop doing is sniping at each other and trying to politically point score each other.

“Where there is a failing in one department in the Executive, then the others need to rally round and help support them to get it fixed as opposed to pointing a finger at somebody else to detract attention away from them. That is the fundamental problem.”

All five Executive parties - including the DUP, which previously opposed extending existing restrictions - last week agreed to a two week “circuit break” lockdown in the North, starting next Friday.

It comes after an easing of some restrictions last Friday and will include the closure of hospitality, churches, non-essential retail, close contact businesses as well as leisure and entertainment businesses.

The measures were agreed amid concerns about hospital capacity in the North and warnings that the Covid-19 situation could deteriorate further still.

Ten more people with the disease have died in the North, bringing the total recorded death toll since the pandemic began to 933, according to the Department of Health.

Six of the deaths occurred over a 24 hour period between Saturday and Sunday morning, with the other four deaths happening earlier but only now being reported.

A further 342 cases of the virus were confirmed on Sunday, taking the total number of confirmed cases in the North to 49,784.

SDLP MLA Matthew O’Toole, who sits on Stormont’s Finance Committee, accused the Executive of “dither and delay” over getting badly needed financial support to traders forced to shut because of the latest restrictions.

“We have a significant amount of financial resource that is sitting in the Executive’s coffers - around half a billion - we know that is there to be spent on exactly this,” he said.

“We have seen, unfortunately, quite a lot of dither and delay over allocating it properly, getting the schemes up and running.”

Mr O’Toole said the North’s Department of the Economy and Department of Finance needed to work together to get supports “out the door”.

“It is simply not good enough to leave that dangling with the lack of clarity businesses have,” he said, adding that businesses have suffered “enormous and completely unacceptable confusion over the last few weeks.”