Pilita Clark: 2020 has upped the value of the polite, swift and considerate email 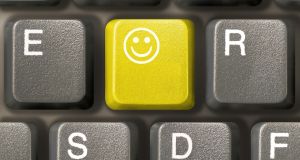 ‘At some point after the lockdowns started this year, I found myself signing off work emails differently.’ Photograph: iStock

Last week a 14-word email landed in my inbox from someone called Greg who did not like a column I had just written about green investments.

“Grass is green,” it said. “You going to invest in that too? What a goofy article.”

There is much to admire in an email like this. It was short. It had a point and its meaning was more or less clear. Alas, it fell down on another measure. It was unpleasant.

This comes with the territory if you are lucky enough to be paid to write for a newspaper. But Greg’s sour words were also a reminder of how tricky ordinary work emails have become in these fraught Covid times, when so much of what we used to say in person is now done by hitting send.

Not long after that email arrived, it emerged that UK climate officials had been looking at research suggesting tonnes of carbon emissions could be cut if something were done about the 64 million pointless emails that Brits send each other every day. Worryingly, the two deemed to be most needless said either “thank you” or “thanks”.

I am all in favour of cutting emissions. I know emails rely on laptops and data centres powered by electricity that is currently far from clean. But if the strains of pandemic life have shown anything, it is that we need more civility, not less.

At least three times in the past few months, I have sent off a carefully worded email to ask or answer a work question, and received either a brusque one-word reply (“no”; “possibly”) or no response at all.

It would be one thing if these were people I worked with or knew well, but it is another when they are not.

I tend to forgive the non-responders, having forgotten to answer so many emails myself lately that I have taken to sending calendar reminders about the ones that really need answering.

The curt one-worder is more complicated.

Each time I have received one, I tell myself the sender was busy and distracted, not trying to be deliberately dismissive. Yet a question always lingers.

It never occurred to me that anyone else could be bothered by this sort of thing until a friend confided the other day that he, too, had been sent some abrupt emails at his company that had left him rattled.

He had formed a sensible theory about it. “It’s like a long-distance relationship,” he said. In the absence of physical contact, we parse each fragment of writing with pathetic intensity. In the process, we’re apt to conjure meaning from words that a hapless writer never meant to convey.

He had a point. Although some terse emailers do indeed want to send a terse message, I’m inclined to think most are just dealing with the numberless trials of Covid life.

Does this make their emails forgivable? Probably, though the line must be drawn at any boss who thinks it reasonable to answer a considered email from an underling with that grimmest of one-word replies: “Noted.”

I suspect that, in some inchoate way, we understand that 2020 has upped the value of the polite, swift and considerate email.

This may explain why, at some point after the lockdowns started this year, I found myself signing off work emails differently.

Instead of the bland “best wishes” and “kind regards” I had used for years, I suddenly began to say “all the best” or even “all very best”. Worse, there has been an undeniable rise in my use of exclamation points in emails, a punctuation mark I generally avoid.

Most alarming of all, I have begun to use the emoji. There is something about its direct simplicity that makes it cheering. It started with friends on WhatsApp but has now drifted over to work colleagues. It can only be a matter of time before a yellow thumbs-up is fired off to some unsuspecting FTSE 100 executive, or an unknown reader.

Speaking of which, Greg, if you are reading this, I didn’t have time to get back to you earlier, but now I do: “Noted.”