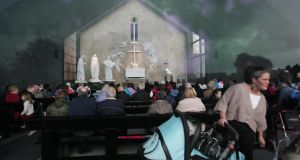 Online Masses from Knock during both lockdowns have been attracting worldwide audiences from as far apart as Ho Chi Minh City to Anchorage in Alaska. File photograph: Brenda Fitzsimons

Income at Knock shrine in Co Mayo has been “massively” down due to the Covid-19 pandemic and was now “just keeping going thanks to the generosity of people,” parish priest Fr Richard Gibbons has said.

Following major development work there in recent years, leading up to the visit of Pope Francis in August 2018, significant debt had been accumulated “but we had hoped to clear everything this year,” he said. It was not to be.

“Thankfully, the wage subsidy scheme helped,” for the 110 fulltime staff, which increases to 170 in the summertime, he said. During the summer people on staycation meant that “huge numbers of families” in particular attended the shrine, with as many as 200 people, in pods of 50, able to attend Masses in the Basilica. It has a capacity for over 3,700.

Social distancing was not a problem on Knock’s 100 acre site. This year the novena did not take place and for the first time the shrine itself was closed on August 15th. “We felt that was the responsible thing to do as upwards of 20,000 people can attend on that day,” said Fr Gibbons.

Online Masses from Knock during both lockdowns have been attracting worldwide audiences “from as far apart as Ho Chi Minh City to Anchorage” in Alaska, he said. They were fortunate at the shrine, when the first lockdown took place last March, that “we had Nasa-type technology in place” since 2016 and helped by the papal visit.

It means that, as well as Masses, they have been able to provide online retreats and podcasts as well. Currently, they are organising a Mass for all Ireland’s Covid-19 dead, which is to take place at noon on Sunday November 22nd next.

Streamed live, it will be celebrated by Archbishop (of Tuam) Michael Neary and will remember the 1,995 people in the Republic and 878 in Northern Ireland who have lost their lives to the virus to date. A candle for each of those people will be lit in the Basilica on the day. Petitions may be placed online prior to the Mass and these will be downloaded and placed on the altar and prayed for during the Mass.

The shrine has also organised a campaign for people throughout the island to “nominate your parish hero”. The intention is to honour people who, in the Covid-19 context, were responsible for “those ‘little, nameless, unremembered acts of kindness and of love,’ as Wordsworth put it,” said Fr Gibbons.

Details on how such heroes can be nominated are available on the Knock website with the winning hero announced at a Carols by Candelight service in the Basilica on December 19th.