A large number of people came into Cork city to socialise on Saturday night, with few seen maintaining a social distance, gardaí said, but there were few instances of drunkenness or public order issues. Video: Ali Hamou 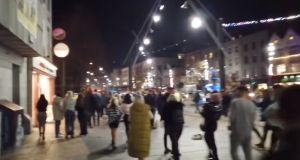 A large number of people came into Cork city centre to socialise on Saturday night, with few seen maintaining a social distance, gardaí said, but there were few instances of drunkenness or public order issues. Image: Facebook/Ali Hamou.

A large number of people came into Cork city centre to socialise on Saturday night, with most not maintaining a social distance or wearing masks, gardaí said, but there were few instances of drunkenness or public order issues.

Gardaí have this weekend mount heightened checks and patrols in public places associated with on-street drinking during the pandemic after alarm was raised over crowds gathering in Dublin and Cork last weekend. Plans to ban the sale of takeaway drinks from pubs for the remainder of the lockdown were floated and later dropped by the Government following the scenes.

A source said people began coming into Cork city centre from around 4pm and formed queues outside the dozen or so pubs that are serving takeaway pints before drinking outdoors.

The source said pubs were serving alcohol on the North Main Street, Cornmarket Street, Oliver Plunkett Street, Marlboro Street, Patrick Street, Emmet Place and the Grand Parade, some having queues of up to 60 people outside.

A number of coffee shops and ice cream parlours were also open and drew lengthy queues on Saturday evening.

Families came to town at around 5pm to see the Christmas lights and some were still there two and three hours later, said the source, and these added to the numbers around Patrick Street, Oliver Plunkett Street and Grand Parade.

The source said that “as long as you have pubs that can sell takeaway drinks, then you will have people availing of that”.

“So the number of arrests for public order wasn’t anything unusual even though we did end up with 600-700 people in the city centre area particularly around the Grand Parade. People were not keeping proper social distancing but when gardaí asked people to move on, they did.”

A Garda spokesman said videos circulating on social media of gardaí racing into a crowd at the Grand Parade related to a pursuit of a young man suspected of drug dealing. He was later arrested and a quantity of cocaine was recovered.

“One Garda received minor facial injuries during the incident. During this incident, and as a result of a small number of other, mainly related, minor public order incidents, nine males were arrested by gardaí,” the spokesman said.

Footage filmed by charity worker Ali Hamou, who works in Cork city centre, was posted on social media on Saturday night. It showed large groups of people, many without masks, gathered in the Grand Parade area.

Mr Hamou, who volunteers with the One Human Charity giving out food and clothes to people sleeping rough in Cork city centre, posted that “Saturday night was a troubled night”. He estimated that up to 1,000 people were in the city centre at around 8pm.

A Garda source told The Irish Examiner that Friday night had been one of the busiest gardaí had experienced in Cork since the pandemic began back in March, despite the State being under Level 5 lockdown restrictions. Saturday night “seems to have built on that”, the source said.

Dublin city centre was also busy on Saturday evening and night but Garda sources said there was less alcohol consumption than on the previous weekend and few public order incidents.

Gardaí directed some groups of drinkers to move on but there were no major incidents, one source said. Many of those who came to the city were families trying to see the Christmas lights and went home in the early evening.

Footage of a large crowd singing along to a busker on Grafton Street has been widely shared online. Gardaí said the crowd dispersed shortly afterwards.