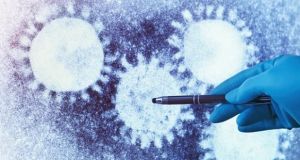 The 14-day incidence rate of Covid-19 in the Republic stands at 152 cases per 100,000 people, a reduction of 51 per cent compared with two weeks ago. Image: Paul Scott/The Irish Times

A further 16 coronavirus-related deaths and 270 confirmed cases were reported in the Republic on Tuesday.

The National Public Health Emergency Team said 14 of the deaths occurred in November, one in October and one was under investigation.

This is the highest number of daily reported deaths since May 27th.

There have been 1,963 deaths linked to Covid-19 and 65,889 confirmed cases of the virus in the State since the pandemic began.

There were 282 patients with Covid-19 in hospital on Tuesday, of which 40 are being treated in intensive care units. There have been an additional 21 hospitalisations in the past 24 hours.

Dublin accounts for the largest share of the new cases with 82, followed by Donegal with 21, Roscommon with 18 and Limerick and Tipperary each with 17. The remaining 115 cases are spread across 20 counties.

The State’s chief medical officer Dr Tony Holohan said there had been “a significant improvement” in the profile of the disease with the 14-day incidence rate of the disease standing at 152 cases per 100,000 people, a reduction of 51 per cent compared with two weeks ago.

“To maintain this positive trajectory, we need to remain vigilant to the highly infectious nature of this virus, which can easily spread from person to person through close contact and by social mixing,” he said.

“Our individual everyday choices to stay at home and keep our contacts to a minimum are vital to driving down the spread of Covid-19.”

While he said he wanted people to enjoy the festive season it was important to do so in a way that did not spread the virus.

While he welcomed the Pfizer announcement of a Covid-19 vaccine, Dr Nabarro warned that it would some time, probably next year, before it became widely available.

“We are being given advance warning of something brilliant, but at the same time we have to be prepared for several weeks, perhaps even months more work before the vaccine or a vaccine like it can become available for people.”

It was also important that a number of vaccines be developed, he added.

“You don’t really know how long protection lasts until you’ve been able to study vaccinated people over time, it’s a bit early to say whether this vaccine gives protection for weeks and months or even years,” said Dr Nabarro, who is one of six WHO special envoys on Covid-19.

The new vaccine is expected to be submitted to authorities for emergency approval in the third week of November.

Encouraged by the results, immunologist Prof Luke O’Neill said nursing homes could have the Covid-19 vaccine before Christmas.

While this could be an ambitious outlook, he said certainly by early next year the older population and vulnerable groups would be among the first to be vaccinated.

Speaking on Newstalk’s Pat Kenny show, Prof O’Neill said that when the data from Pfizer was shared in a scientific report it would take another three to four weeks for the vaccine to become a reality.

Healthcare workers and nursing home residents would be first in line for a vaccine.

“You could see a situation where every nursing home now will have the vaccine available to it, maybe just before Christmas. That seems a bit ambitious but certainly early next year we will see the older population being vaccinated and the vulnerable groups, the ones who have got other diseases.”

Prof O’Neill predicted that there would be announcements about two more vaccines before Christmas from Oxford-AstraZeneca and Moderna.

“That means supply won’t be an issue because they can all roll out billions of doses as we move into 2021 and secondly, Pfizer had already mobilised an army to prepare 1.4 billion doses of this vaccine so they are ramping up production massively.”

Government Ministers are likely to discuss Ireland’s ongoing Covid-19 restrictions at Cabinet this morning as a memorandum on the new European traffic light system is among the items on the agenda, sources said.

Among the major decisions required in the coming weeks by the Government is what level of travel restrictions are in place for Christmas, when several hundred thousand people would normally arrive in Ireland for the holidays.

More generally, there are intensive discussions going on in Government about reopening after the lockdown ends at the beginning of December.