Buying guaranteed Irish products is more important now than ever before 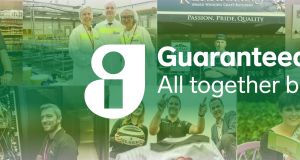 In the mid-1970s the Irish Goods Council rolled out a Buy Irish initiative with a view to encouraging people to shop locally. The Big G started appearing on everything from cream to copy books. While it was an enduring symbol in the late 1970s, by the middle of the next decade things had changed dramatically.

As a result of a 1984 ruling by the European Court of Justice which declared that individual countries were no longer able to promote their own products as being better than those produced elsewhere within the European Union – or what was then known as the EEC – the scheme fell out of government control.

Guaranteed Irish did not die though. Instead, it became a not-for-profit organisation but for many years its label was largely ignored by the buying public as an anachronistic throwback to times past. But with the economic crash of a decade or so ago, the Big G saw something of a resurgence and it has continued to grow in relevance over recent years.

It has rarely been as important as it is today.

While some of the products that carry the logo may raise an eyebrow on occasions – can a tea really be Irish? – the rules are clear. To carry the Guaranteed Irish symbol businesses must “provide quality jobs including fair working conditions, professional development and long-term employment” in Ireland. They must have “a positive impact on local communities and [be] part of the fabric of Irish society”. Companies must also have “a physical presence in Ireland and add value to its product or service here”.

Brid O’Connell is chief executive of Guaranteed Irish and she says buying Irish has rarely mattered as much to Irish consumers as it does now with people looking to use whatever money they have to support local businesses.

She says that as many as two-thirds of Irish consumers have chosen to shop with Irish small businesses to support them through the Covid-19 crisis and she points to research carried out early this year – in pre-Covid times – which found that 92 per cent of people associated buying locally with sustainability.

“I think people are starting to realise more and more that when you shop locally, you are killing so many birds with the one stone,” she says. “You are supporting jobs and doing less damage to the environment and you are helping the local community and giving yourself a real feel-good factor too.”

Further research has also shown that 53 per cent of shoppers here reckon they have done more shopping with Irish companies than foreign retailers since pre-crisis times, according to O’Connell. “The crisis has focused the minds of people in Ireland and I think so many of them really want to do what they can to help struggling businesses and to support the local economy.”

That does not mean everything is perfect, particularly in the online space.

“Irish retailers have definitely got better but there is long way to go,” she says. “A lot of Irish businesses are really good at Instagram or Pinterest and have lovely images of their stock on social but we have to focus on the ecommerce piece and how businesses can market themselves.

If we all bought one gift from here instead of Amazon, it will have the effect of saving jobs

“They have leapfrogged several years in some cases for sure, because they had to as during lockdown online was the only revenue stream, but there is still a lot of work that needs to be done.”

To make shopping easier for people, the umbrella group has recently set up a website – GuaranteedIrishGifts.ie – to connect shoppers with shops, and Guaranteed Irish has also set consumers a Christmas challenge. It seems pretty straightforward. They want people to buy just one gift from GuaranteedIrishGifts.ie. “If we all bought one gift from here instead of Amazon, it will have the effect of saving jobs. No one is saying never buy off Amazon again but we need to become a ‘conscious consumer’ and think how our money is being used.”

Over and over again O’Connell stresses the benefits of shopping locally and says that every €100 spent in Ireland can be worth as much as €500 to the local economy as the money is circulated widely closer to home rather than being sucked up in another jurisdiction.

She also stresses that – contrary to what many people think – prices for products on Irish sites are “competitive with overseas products, save for overseas businesses that can sometimes be unsustainable and unethical”.

Every nation in the world acknowledges that Irish is a premium label; it’s a shame we don’t value it ourselves

Irish websites are, she says, “definitely more competitive than people think and can easily go toe to toe with big international players. Having said that, if Alibaba is selling a dress or a complete outfit for a fiver, then a local business will not be able to compete with that, no one can compete with that but you have to look at where the products are sourced and what the quality is, you have to ask questions about the very cheap stuff that is available.”

She adds that quality and “price per wear” must be borne in mind when deciding to buy locally made clothes over “cheap disposable, fast fashion”.

“Every nation in the world acknowledges that Irish is a premium label; it’s a shame we don’t value it ourselves.”

But it is not all about consumers and O’Connell says retailers must do more to support their local suppliers and producers. “Irish local shops are crying out for help, yet they aren’t stocking Irish products themselves in many cases, not all, but many cases; they need to play their role too. They are not going far enough.”

She wants all Irish local retailers “to stock at least one Irish line/Irish producer – candles, jewellery, crafts, scarves, textiles, pottery, accessories, books, scents, beauty creams. If we can’t see it, we can’t buy it. Also, if the local retailer is asking for help, perhaps they, in turn, help the maker, and start to sell products from local creators/ designers/ producers alongside their international brands. We can co-exist comfortably.”

O’Connell says buying Irish is not entirely an altruistic approach and from a purely selfish perspective, consumers will benefit too. People have more rights than when they buy online from countries such as the US or China, for a start.

“You can also buy brands with which you are familiar from stores that you know. It will also be delivered faster and if you have to return something, that can be done faster too. And we have to remember that it is not all about Aran jumpers or the more traditional gifts any more, although they are great. Irish businesses are also selling great tech, art, great food and amazing gifts.”