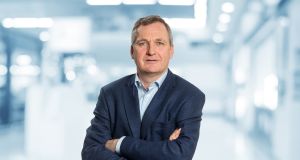 An Irish company is to develop the world’s first human challenge trial for Covid-19, which will see healthy volunteers exposed to the virus as a first step to testing the effectiveness of potential vaccines.

The initial study, which is being funded by the British government in a deal worth up to €11.1 million, will begin in January in London, pending regulatory and ethical approval. It is being run by Dublin-based Open Orphan and its UK subsidiary, hVIVO, which has a history of running human challenge trials for viruses like influenza, malaria and the common cold.

Volunteers are being recruited now, and are typically university students motivated by altruism or curiosity, says Open Orphan’s executive chairman Cathal Friel. They are paid £3,500 (€3,900) for their time, a rate set by a UK ethics panel. “Quite a few are journalists writing books or people finishing theses. Anything that needs two weeks’ peace and quiet.”

During the first study in January, volunteers will check into a private suite, which they will not be allowed to leave for two weeks. After two days, they are exposed to low doses of SARS-CoV-2 to determine the level at which most people will become infected. If they get sick, they will be treated with antivirals.

In later vaccine trials, volunteers will be given either a new vaccine candidate or a placebo before being exposed to the virus. This week, Pfizer announced the results of an interim analysis which found that its vaccine is 90 per cent effective. There are 10 other vaccine candidates at phase-3 stage.

Mr Friel, a Donegal man with a background in stockbroking and finance, became involved in the trials when his company acquired hVIVO in January, just as the first cases of a new novel coronavirus strain were beginning to emerge in Wuhan, China.