Coronavirus: Most deaths have been in settings such as hospitals and nursing homes 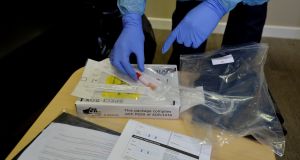 Ten more patients with Covid-19 have died, by far the highest daily death toll so far in the outbreak.

The deaths occurred among three women and seven men; nine were from the east of the country and one from the south. Chief medical officer Dr Tony Holohan said most died in institutional settings such as hospitals or nursing homes.

Thursday also saw a record daily number of new confirmed cases, at 255, according to the National Public Health Emergency Team.

There have now been a total of 1,819 cases of coronavirus in the Republic, and 19 deaths.

Community transmission now accounts for a majority (51per cent) of all cases of coronavirus, according to the latest analysis.

Close contact with confirmed cases accounts for 22 per cent of cases, and travel abroad for 27 per cent.

Among the 66 clusters of infection, nine were in nursing homes, eight were in hospitals and two were in community and long-stay environments.

The research also points to a high level of compliance among the public with the restrictive measures introduced in recent weeks, with 66 per cent saying they are coughing into their elbow and 81 per cent exercising physical distancing when in a queue.

Dr Holohan said Ireland was “only at the beginning of the curve” and needed every citizen to heed the advice and measures put in place.

He said the number of deaths was small in relative terms but more were to be expected as levels of infection increased.

It wasn’t unusual for influenza to cause an additional 1,000 deaths every winter, he pointed out.

However, a set of principles had been agreed which would be applied to any decision on segregating work, according to HSE chief clinical officer Dr Colm Henry.

Outside the cities, it would be difficult to designate hospitals as exclusively for one purpose or another, he said.

Dr Henry said the health service was running low on some protective equipment, particularly goggles. Hospitals had been advised to use equipment appropriately, to conserve stocks and to substitute items.

“Based on the information we have, we believe we have enough to bridge us through to the delivery from China next week.”

With more doctors internationally saying masks should be worn in all clinical engagements due to the threat posed by coronavirus, officials said this issue was under consideration by NPHET.

The continuing increase in patients admitted to ICU and in community transmission was an ongoing concern because of the vulnerability of those affected, Dr Holohan said. However, the number of new cases was not rising as fast as expected and this gave some encouragement.

The NPHET is due to meet again on Friday to discuss further measures that could be taken to curb the spread of the virus.