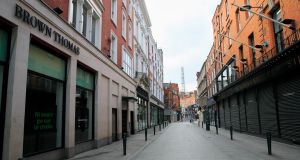 A quiet Wicklow Street in Dublin city centre on Thursday, closed due to the Covid-19 outbreak. Photograph: Gareth Chaney/Collins

Euro zone leaders failed to reach agreement on Thursday night on additional borrowing tools to help countries finance their response to the coronavirus crisis after hours of negotiations over a video conference call.

Nine countries including France, Italy, Spain, Portugal and Ireland had appealed for common debt issuance or eurobonds as extra firepower that could ensure “stable long-term financing for the policies required to counter the damages caused by this pandemic”.

But the proposals were strongly opposed by countries including the Netherlands. The Dutch government is concerned at the prospect of becoming a guarantor of weaker economies, and has argued that common debt issuance “undermine incentives for sensible policy at national level”.

It argues that the relaxation of borrowing and state aid rules by the European Commission and a €750 billion stimulus package from the European Central Bank already put in place should suffice.

Before the video conference had even finished, Italian prime minister Giuseppe Conte announced he had rejected draft proposals for being too timid. He gave the EU 10 days to come up with adequate solutions, and said Spain’s Pedro Sanchez agreed with the deadline. The two countries have been the hardest hit to date in Europe by the pandemic.

An Irish Government official said EU leaders had “called on the eurogroup to bring forward its proposals within two weeks”.

“They agreed to continue to co-ordinate joint actions on containing the spread of the virus, on procurement of vital medical equipment, on facilitating critical supply chains, on funding research into vaccines and new medicines, and on getting EU citizens home,” the official said.

The EU countries have struggled to agree on a common seven-year budget that must be reached by the end of the year, due to division between frugal states and those who wish to spend more money to meet European ambitions.

“When Europe really needed an all-for-one spirit, too many initially gave an only-for-me response,” she said.

The euro zone impasse came as world leaders scrambled to co-ordinate an effective response to economic turmoil that threatens a downturn of historic proportions as the coronavirus pandemic shuts down public life from India to New York.

The G20 vowed a “united front” against the pandemic, and said they were injecting some $5 trillion (€4.5 trillion) into the world economy through national measures in efforts to lessen its impact, after criticism that global leaders have failed to muster an effective response.

“We are strongly committed to presenting a united front against this common threat,” the leaders of countries representing 80 per cent of the world’s GDP said in a joint statement after they gathered for a conference call to discuss their response to the pandemic.

Eearlier in the day, the Economic and Social Research Institute warned of a severe impact on the Irish economy, predicting it could shrink by as much as 7.1 per cent this year due to the crisis, with 350,000 people or a sixth of the working population expected to lose their jobs.

“The swiftness of the economic deterioration is unprecedented in modern times and in many respects exceeds that of the financial crisis,” it said.