Streets deserted amid fears that coronavirus could ‘take down’ Venezuela 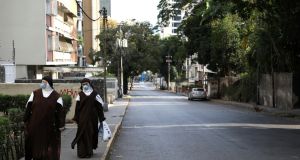 When the new coronavirus reached South America no government in the region moved more swiftly or aggressively against the threat it posed than the chavista regime in Venezuela.

A strict quarantine already in place in several states was extended nationwide on March 16th as President Nicolás Maduro said “drastic” measures were necessary or else “the pandemic could tragically and painfully take down Venezuela”.

The president’s fears are well founded, say analysts, even thought the country has only 106 confirmed infections and no recorded deaths so far.

If the concern in many countries is about the huge pressure Covid-19 puts on well-functioning health systems and economies, in Venezuela the virus is spreading in a nation already in a state of collapse after the descent of the populist “Bolivarian Revolution” of Hugo Chávez into economic chaos and authoritarianism under his successor.

Even before the coronavirus arrived half the country lacked regular access to running water while one in three Venezuelans does not have secure access to food. Hospitals have for years suffered from widespread shortages of medical equipment and medicines.

“This pandemic is already taking a massive toll on health systems in very developed countries so I can’t imagine how bad it is going to get in Venezuela. I think we are on the verge of a widespread humanitarian tragedy,” says Geoff Ramsey, assistant director of the Venezuela programme at the Washington Office on Latin America think-tank.

According to the Global Index of Health Security, Venezuela is the least prepared country in Latin America and the Caribbean to respond to the crisis and ranks 176th out of 195 countries globally, with little capacity for early detection and mitigation measures.

Footage of a deserted Caracas and other cities indicates the national lockdown, which is being enforced by a strong security presence on the streets, is for now being obeyed. But in a country where even beforeCovid-19 arrived millions of people had little access to food and water, it is unclear how long the population can remain shut up at home.

Venezuelan economist Francisco Rodríguez estimates a government subsidy programme to support the population in quarantine would cost the state about $400 (€370) million a month. Based on the length of time in China needed to defeat the virus that implies a cost of €1.1 billion.

“Can Venezuela afford this cost? With the weakened state of its public finances and in the absence of political agreements that allow it to access other funds, the answer is no,” writes Rodríguez, who heads Oil for Venezuela, a non-profit body seeking solutions to Venezuela’s humanitarian crisis, in a blog post.

Aggravating the situation, the pandemic has hit just as the price of oil, Venezuela’s only significant hard currency earner, has collapsed as a result of the price war between Saudi Arabia and Russia. That and a tightening of US sanctions last month has probably resulted in the revenue Caracas generates from oil sales falling below the cost of production.

The risk of a possible humanitarian calamity has led to calls for sanctions on Caracas to be relaxed. This, some observers say, could also provide future impetus to the currently stalled search for a solution to the country’s political crisis.

“Offering some form of conditional sanctions relief to Maduro to allow revenue to go to the health sector would not only address the reality of the health crisis but potentially provide much needed wriggle room for a political solution down the road,” says Ramsey at the Washington Office on Latin America.

For now the ongoing stand-off between Maduro and opposition leader Juan Guaidó is stymying efforts to access emergency foreign aid. The International Monetary Fund rejected a $5 billion loan request from Maduro to tackle the virus, citing a lack of clarity over who is the country’s legitimate government after dozens of countries recognised Guaidó as Venezuela’s legitimate president last year.

Hopes the two men could reach even a temporary agreement that would allow the country to unlock desperately needed funds have so far been frustrated with the two sides instead engaged in a dispute over the true number of Covid-19 infections in the country.