The Irish Times view on the economy: in sudden, steep decline

As the emergency continues, the essential job of economic policy is to try to maintain as much of the economic fabric as possible 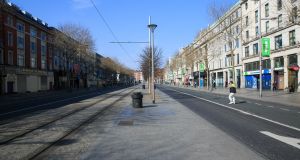 A deserted O’Connell Street in Dublin as business and social activity all but ceases as a result of public health restrictions. Photograph: Gareth Chaney/Collins

The key policy focus in addressing the Covid-19 crisis is on public health, but the economic implication are also enormous. The latest forecasts from the Economic and Social Research Institute, of necessity tentative, warn that the economy could contract by more than 7 percent this year. And the decline could be greater if the public health crisis and the associated restrictions drag on. Some 350,000 jobs are at risk of being lost. As with so many areas of our lives, the economic outlook has turned on its head in a matter of a couple of short weeks.

The forecasts invite inevitable comparisons with the financial crisis which started in 2008. The speed of economic decline is likely to exceed what happened then and the unemployment rate may go higher. The difference, however, is that we must hope we do not head into the same dire negative cycle which took hold back then, based – in Ireland’s case – on a major hole in bank balance sheets, as well as huge vulnerabilities in the public finances. This greatly prolonged the last crisis.

This time the initial hit will indeed be hard, with the exchequer falling into deficit to the tune of over 4 per cent of GDP, on the ESRI estimates. Borrowing could rise further and the recession could drag on if the public health situation is not sufficiently stabilised to allow at least some of the restrictions to be eased over the next few months. At the moment, we just don’t know if this is the case.

In the meantime, the essential job of economic policy is to try to maintain as much of the economic fabric as possible. The Government is trying to achieve this, though it is a complicated and expensive job. Nonetheless, to keep as many companies ticking over and connected to their employees as possible is vital. It means that when the restrictions do start to lift, then parts of the economy would be in a better position to restart, however tentatively.

There will be permanent economic damage too – that is unavoidable. The challenge is to minimise it. As the ESRI points out, as a small trading economy we are also reliant on what happens in other countries – we need international economies to start down the recovery road too to support our vital export sector.

Governments and public authorities everywhere face huge economic challenges in the weeks ahead. One positive signal for Ireland is the swift reaction of the European Central Bank. Clarification on Thursday that it will have extraordinary flexibility to intervene in the market is welcome. For now, borrowing rates for Ireland remain low – thought it is difficult to know what lies ahead as countries seek to raise huge sums of cash in the months ahead to pay for the cost of all this. It has huge implications, too, for the next government, but the first job is to fight our way through the emergency.