Coronavirus: 10 more deaths and 255 new cases confirmed in the Republic

There have now been a total of 1,819 cases in the State and 19 fatalities

Elizabeth Canavan of the Department of the Taoiseach has said said that the Government is preparing to provide temporary morgue facilities in anticipation of a surge of the coronavirus pandemic. Video: RTE News Now 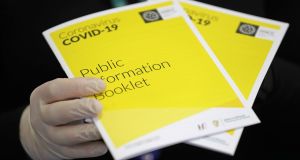 Ten more patients with Covid-19 have died, by far the highest daily death toll so far in the outbreak.

The deaths occurred among three women and seven men; nine were from the east of the country and one from the south.

Thursday also saw a record daily number of new confirmed cases, at 255, according to the National Public Health Emergency Team.

There have now been a total of 1,819 cases of coronavirus in the Republic, and 19 deaths.

Community transmission now accounts for a majority of all cases (51 per cent) of coronavirus, according to the latest analysis.

Close contact with confirmed cases accounts for 22 per cent of cases, and travel abroad for 27 per cent.

The research also points to a high level of compliance among the public with the restrictive measures introduced in recent weeks, with 66 per cent saying they are coughing into their elbow and 81 per cent exercising physical distancing when in a queue.

Chief medical officer Dr Tony Holohan said Ireland was “only at the beginning of the curve” and needed every citizen to heed the advice and measures put in place.

The HSE is now working to identify any contacts the patients may have had to provide them with information and advice to prevent further spread.

A breakdown of data from the Health Protection Surveillance Centre, of the cases diagnosed as of midnight on Tuesday (1,383 cases) reveals the median age of confirmed cases is 46 years and 340 cases (25 per cent) have been hospitalised.

Of those hospitalised, 47 cases have been admitted to ICU.

Overall, some 321 cases (23 per cent) are associated with healthcare workers.

At a briefing at the Department of Health on Thursday night it was confirmed that a shipment of personal protective equipment for those treating those with Covid-19 was due to arrive in Ireland from China early next week.

Earlier, Minister for Health Simon Harris confirmed student nurses will be paid for the duration of the coronavirus crisis.

All student nurses and midwives will be offered a contract as a healthcare assistant and be paid accordingly.

Mr Harris said on Thursday evening: “I want to thank our student nurses and midwives for the brilliant work they are doing in this difficult time.

“We need all hands on deck through this challenging period.

“This is an offer and not an obligation. But I know so many of our student nurses want to play their role as we navigate our way through these difficult times.

“Our healthcare professionals have shown immense leadership and I will do everything I can to support them.”

There are around 4,000 student nurses across the State.

The news was welcomed by the Irish Nurses and Midwives Organisation. It’s general secretary, Phil Ní Sheaghdha, said it was good news for student nurses and good news for the wider health service.

“These are dedicated, talented, hard-working people who are keen to help in the global fight against Covid-19. Taking them on as paid staff not only values their work, but offers them clear protections as employees,” she said.

“We will now engage with the government to determine the detail of this announcement, particularly on ensuring that students’ academic progression isn’t harmed by the crisis.”

The Taoiseach Leo Varadkar acknowledged in the Dáil that “this emergency has already cost lives and cost jobs, and is going to get worse before it gets better”.

He added that people were looking for reassurance and “politicians don’t always have a good reputation, sometimes deservedly so, but we do have an opportunity to shine.

“Not as individuals, but as a group. We can show that the ideals that first motivated us to enter politics can sustain us when our country needs hope the most.”

Earlier the Economic and Social Research Institute said the economy will slide into recession this year as a consequence of the coronavirus crisis.

In a stark briefing the economic think tank indicated that contraction could be as much as 7.1 per cent in 2020. This assumes the shutdown measures stay in place for 12 weeks and the economy recovers afterwards.

In its latest quarterly assessment, the institute said the Covid-19 pandemic is the most significant hazard the economy has faced since the financial crisis more than a decade ago.

The institute warning on jobs is also stark. It says the unemployment rate is soaring to 18 per cent in the first three months of the year; and this from a position at the end of 2019 where the economy had an unemployment rate of 4.8 per cent and growth of 5.5 per cent.

“Consumption, investment and net trade would all fall sharply; households would cut spending, firms would cancel or postpone investment and external demand for Irish goods and services will fall,” it said.

The institute estimates that up to 350,000 people will lose their jobs, equating to one-sixth of the working population.

While the Government had been set to run a budget surplus, the impact of Covid-19 on the economy is now expected to produce a deficit of 4.3 per cent due to a significant fall in revenues.

Deteriorating public finances also reflect the significant increase in public spending to support workers who have lost their jobs, help businesses and provide additional health funding to combat the virus, said the institute.

Initial estimates put this package at up to €15 billion.

Three more people in Northern Ireland have died due to the coronavirus, it was confirmed on Thursday, bringing the total number of fatalities in the North so far to ten, the North’s Public Health Agency (PHA) reported on Thursday afternoon.

The PHA also reported that testing has resulted in 32 new Covid-19 cases in Northern Ireland, bringing the total of confirmed cases to 241.

A further 107 people in England who tested positive for coronavirus have died, bringing the number of reported confirmed deaths in England to 521, the NHS said.

In Italy on Thursday another 712 deaths were reported, an increase from the 683 registered the previous day. Total deaths since the start of the outbreak there are 8,215.

Just one-third of the 160 TDs were present and sitting two seats apart for the debate.

The Provisions of the Emergency Measures in the Public Interest (Covid-19) Bill, which would normally take months to debate and enact, will give the Government emergency powers to deal with the pandemic and mitigate economic collapse.

But in a show of solidarity the Dáil stopped its debate at 8pm to applaud health workers on the front line of the struggle against Covid-19. It was agreed following a proposal from People Before Profit TD Bríd Smith.

The Bill includes a rent freeze for tenants, prohibition on evictions and a pause in any notice to quit already issued.

It also includes the approximately €3.7 billion temporary income support package that extends until June 30th. This will be run by the Revenue Commissioners on behalf of the Government which will contribute to wage costs with a weekly subsidy to be passed on to employees.

Sinn Féin leader Mary Lou McDonald said the need to legislate is paramount at this time of a national public health emergency.

She told RTÉ radio’s News at One of her concern at the shortage of personal protective equipment for medical staff. Ms McDonald said there was a need for reassurance that along with the incoming delivery from China that there would be more deliveries to come.

She was speaking from her home where she is self isolating because she has a cold.

It has also emerged that the Government is preparing to provide temporary morgue facilities in anticipation of a surge in fatalities.

A senior official at the Department of the Taoiseach said if such temporary facilities are made available, liaison provisions would be made to help bereaved families.

Assistant secretary at the department Liz Canavan said this would be a critical week for the country in dealing with the pandemic and added the State is in the process of scaling up to conduct 15,000 Covid-19 tests daily. She is the official in charge of the Government’s virus response.

Ms Canavan said a means of paying student nurses working during the coronavirus outbreak is being looked at.

She also said that evening timetables of the Local Link bus services are being suspended. Drivers will be redeployed to collect and deliver groceries and medical supplies to old, sick and vulnerable people in their local communities.

A chartered jet is being organised to repatriate Irish tourists stranded in Peru. Ms Canavan said any Irish citizen in Peru who has not been in contact should immediately contact the nearest Irish Embassy to Peru, which is in Santiago, Chile.