Northern Ireland has extended restrictions by a week after bitter row 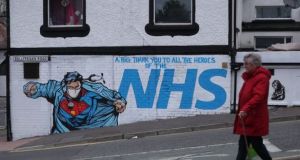 A mural supporting the NHS near the Ulster Hospital in Dundonald, Belfast. File photograph: Niall Carson/PA

A further 10 people with Covid-19 have died in Northern Ireland, the department of health there has said.

The death toll recorded by the department now stands at 846. There were also another 511 confirmed cases of the virus recorded in the last 24-hour reporting period.

A total of 46,359 people have tested positive for Covid-19 in Northern Ireland since the pandemic began and the virus is spreading faster now than in the Republic.

The North’s minister for health warned on Friday that lifting Covid-19 restrictions is a “gamble” and further measures will be needed “probably” before Christmas or the New Year in the North.

“This is a gamble, this is a risk. Do I think it’s enough? No. Will we looking for more, we will go back to the Executive probably before Christmas or the New Year asking for more steps? I firmly believe we will be,” he said.

Ministers agreed on Thursday to a one-week extension of current lockdown restrictions followed by a phased reopening of the hospitality sector after days of bitter division within the Northern Ireland Executive.

Mr Swann had initially asked for the measures to be extended for two weeks on the advice of the North’s Chief Medical Officer, Dr Michael McBride, who warned that failure to do so would lead to “excess deaths”, but this proposal was blocked by the DUP, which used a contentious Stormont mechanism - a cross-community vote - to do so.

Mr Swann criticised the DUP’s step, saying it was “not one I would have used, it’s not one I think was the right thing to do at this time.” - additional reporting PA