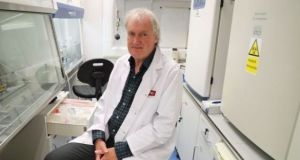 Public trust in science has built up strongly during the Covid-19 pandemic, but if there is no breakthrough over the next six months on a vaccine this could be quickly undermined, according to Prof Luke O’Neill.

Addressing a webinar on how scientists have engaged with the media in recent months, the immunologist based in Trinity College Dublin, who has been prominent in media coverage, underlined he was “90 per cent confident” a suitable vaccine would be found because of the scale of research being undertaken.

He believed the leading US immunologist Dr Anthony Fauci – “the great hero” for many – had pertinent advice for scientists in the form of three rules. The first was go with the data; the second was “if you don’t know, say so”, and the third was: the story is not about you, “it’s about trying to get information out there”.

While scientific literacy in Ireland was at an all-time high, scientists could not be neutral. “They have to counter the fake stuff, especially if it harms people”, he said. The webinar, Science in the Headlines: Communicating Covid-19, was hosted by the Celsius Group in Dublin City University.

Prof O’Neill admitted he was uncomfortable being asked questions such as “should the country go to Level 2?” or “should families be allowed meet at Christmas time?” because “there is no scientific answer to this”.

TCD virologist Dr Kim Roberts highlighted the problem of “fake expertise”, and the particular scenario in Ireland where many public health doctors were not allowed speak out to counter it. On the uncertainty of science, she said it was about being honest and admitting “there are holes in knowledge where we need to learn more, because science takes time”.

There are many challenges for scientists when talking in the media about the pandemic, said Dr Claire O’Connell, a regular contributor to Irish Times science coverage.

“These include keeping up to date with the deluge of new studies coming out, tackling misinformation and disinformation and also being asked about questions or topics that lie outside their particular field of expertise. Then they also need to communicate the uncertainty that is a hallmark of this pandemic,” she added.

Dr Brian Trench, a specialist on science communication, said the pandemic was an extraordinary learning experience for the public, with many more people now having an understanding of science as “a continuing process of discovery, rediscovery and reducing uncertainty”. He was optimistic there would be lasting benefits for society.

Asked about how the media handled this week’s announcement of 90 per cent efficiency with Pfizer’s Covid-19 vaccine, the science writer Cormac Sheridan said it was reported quite soberly in the first instance with reference to the details being from a press release rather than a research paper.

Listening to Morning Ireland on RTÉ radio next day, however, there was reference to “a game changer” and he was thinking of tweeting “please folks, drop this trope because it raises expectations...we are too early in the process”.

Moreover, he added: “Covid-19 is a complex, multifactorial problem requiring multiple solutions”. The issue may have been due to broadcast interviews being inevitably more emotional compared to the more reserved printed word, he added.

The investigative journalist Maria Delaney of Noteworthy said it was clear general reporters had gained considerable scientific knowledge in recent months, as indicated by their “explainers” and comfort in handling data on coronavirus.

But there had been a marked rise in misinformation, which prompted their news site, in conjunction with The Journal, to undertake 112 detailed “fact checks”. That said, she believed the Irish public were critical and well informed.