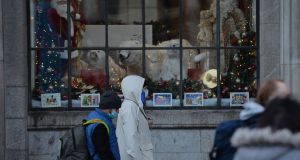 Chief Medical Officer Tony Holohan has warned that recent progress in supressing the spread of Covid-19 is at risk after a new rise in case numbers in recent days.

The National Public Health Emergency Team (Nphet) reported six new deaths and 456 new cases on Saturday evening. This brings to 1,978 the total number of deaths related to the disease in the Republic with the total number of confirmed cases here now at 67,526.

Publishing the data on Saturday night, Dr Holohan said: “Analysis of today’s data shows the five-day moving average of case numbers has increased from 354 to 392.

“We have seen higher numbers in recent days than we expected based on the encouraging trends of the last three weeks.

“We are concerned that this progress is at risk. We have to remember that the virus is still very active in the community and we cannot let our guard slip. Nphet will continue to monitor the situation closely over the coming days.

“We all need to focus on what we can do to stop the spread of this disease; wash our hands regularly, wear a face covering, keep our distance from others, avoid crowds, limit our social network, know the symptoms, self-isolate and contact a GP if we have them. Stay at home and restrict our movements if you are a close contact of a confirmed case.”

Of the cases notified on Saturday:

A total of 254 Covid-19 patients were reported to be in hospital on Sunday, of whom 33 are in an ICU. The positivity rate for the virus is now at 3.6 per cent over the last seven days, according to the Government’s data hub.

On Saturday, Prof Philip Nolan, Nphet’s main modeller, said keeping the country on Level 3 “would have resulted in at least 1,200 hospitalisations” and 150 deaths a month. “Things kept simmering tend to boil over”, he said on Twitter in response to an article in Saturday’s Irish Times.

Separately, Mr Holohan has warned the Government that the number of coronavirus cases in older people and in nursing homes, despite the Level 5 lockdown, remains a concern.

In a letter sent last week, Mr Holohan said that while the key indicators of the disease were improving, it was still “not possible to draw substantive conclusions about the trajectory of the disease at this point”.

Data released this week shows the virus is spreading at different rates across the Republic. Buncrana in Co Donegal continues to have the highest 14-day incidence rate in the State, running at almost four times the national average.

The latest data from the Health Protection Surveillance Centre (HPSC) for the two weeks from October 27th to November 9th examines the number of people infected per 100,000 of population by area, giving a better understanding of the rate of transmission than straight case numbers.

The national rate has been decreasing gradually since the move to tighter restrictions and stood at 135 as of Thursday, down from a peak of 310. (Coronavirus search: Check how Covid-19 is spreading in your area).

On Friday, Taoiseach Micheál Martin confirmed the Government was planning a phased exit from lockdown from the start of December.

This would allow families to celebrate Christmas together where people live in different counties, and to some extent for people to meet up and socialise with friends.

However, Mr Martin said people would not be “going on the lash” or to Christmas parties when Ireland emerged from lockdown next month.