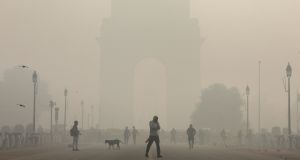 India’s capital, New Delhi, is beleaguered by a winter surge in coronavirus cases as temperatures fall and severe air pollution appears to exacerbate the situation.

The city confirmed a further 7,100 Covid-19 cases on Thursday, the highest of all regions across India, which has reported the second highest number of infections after the US, with over 8.73 million confirmed cases and about 129,000 deaths.

Official figures say 81.15 million people have recovered since the start of the outbreak, indicating a 98 per cent recuperation rate.

Medical experts said that air pollution in Delhi – nearly 12 times what the World Health Organisation considers safe – could increase the transmissibility of the virus by causing respiratory problems and reducing immunity. They said the capital’s air quality was the equivalent of each of its 29 million residents smoking at least 30 non-filtered cigarettes per day.

“We are likely to see virus cases spiking due to the pollution and consequently a higher mortality rate,” said Dr Randeep Guleria, India’s leading pulmonologist and director of Delhi’s prestigious All India Institute of Medical Sciences. Several studies, he said, had indicated that the effect of pollution on people contracting the virus could be deadly.

Recent studies by Harvard University in the US and the University of Cambridge in England have underlined the link between air pollution and respiratory ailments.

Exacerbating Delhi’s woes is the polluting froth that has covered the Yamuna river flowing through the city, which officials warned could contaminate the drinking water supply of millions living in its vicinity.

Environmentalists said the froth floating on the river’s surface was caused by detergents released by hundreds of cloth-dying factories, which contained a high level of poisonous phosphates.

India’s National Centre for Disease Control said Delhi was likely to report 15,000 new Covid-19 cases per day as winter progressed due largely to the incidence of respiratory illnesses affected by the toxic air.

Delhi’s air-quality index invariably worsens with the onset of winter, as farmers in the neighbouring states of Punjab, Haryana and Uttar Pradesh burn their crop stubble after the paddy harvest, ahead of planting wheat. Tens of thousands of these fires trap smoke and pollutants in and around Delhi in cooling temperatures, dangerously contaminating the environment.

Fine dust, sand and cement particles from construction sites add to the pollution, as do tens of millions of diesel vehicles.

The annual Diwali festival of lights, which began on Thursday and in which millions of people let off highly polluting crackers, added to the pollution. And though the authorities, including Delhi’s government, had banned fireworks this year, their prohibition is difficult to enforce.

In the meantime a thick, soupy haze enveloped Delhi earlier this week, forcing drivers to switch on their headlights during the day.

“I have never seen Delhi’s pollution so severe,” said senior civil servant Amit Cowshish. “It’s like breathing smoke constantly and is forcing people to flee the city, which has become a nightmare to live in.”