What’s this creature I found dead on our path? Readers’ nature queries 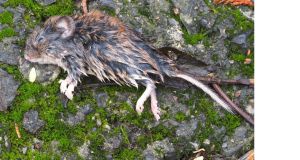 I recently found this little creature dead on our path. The body was 7cm long and the tail 3cm. It didn’t look like a field mouse or a dormouse. – Joe Kearns, Ballindarra, Co Offaly
It’s a juvenile bank vole. They are relatively recent arrivals in this country, first discovered in north Kerry in the 1960s. Full size measures about 15cm, of which 5cm is tail.

Between the illegal culling, tangle nets and bycatch, Waterford coastline is a death zone for seals. This photo, taken on Woodstown beach, is of a dead seal with injuries consistent with gunshot. It is illegal to kill seals. – Brendan Price, Irish Seal Sanctuary, Garristown, Co Dublin

We found these unusual looking fungi in our garden. – Niall Watts, Leopardstown, Dublin 18
It is one of the earthstar fungi, probably Geastrum triplex.

I found an insect on the floor at night. It was like an earwig but bigger and bulkier, and its abdomen ended in a point. It became aggressive when I trapped it and held up its tail like a scorpion. – Gerry Wheeler, Ennistymon, Co Clare
It is a rove beetle called the devil’s coach horse, or dearg-a-daol in Irish. It hunts slugs and insects at night. (The dearg-a-daol pictured is from one of Michael’s drawings.)

I recently came across a cork oak tree growing on the perimeter of a cemetery in Co Waterford. How common is this tree in Ireland? – Brian Robinson, Daingean, Co Offaly
The Tree Council of Ireland lists four cork oak trees in the Republic: one each in Cappoquin, Clonmel, Courtmacsherry and Shillelagh. There are two listed in Co Down, and the National Botanic Gardens has one. There may be others in private gardens, and they are available for planting from specialist garden centres. Corks for wine bottles are made from the bark.