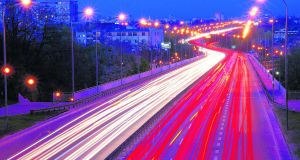 Lighting has been dimmed, or turned off at many of the State’s motorway junctions by Transport Infrastructure Ireland in a move that will cut electricity bills by €1 million a year.

The changes, which began to be introduced in September, follows the fitting of new lighting systems, along with the replacement of existing lamp-posts and older-style bulbs.

Cost was not was the overriding reason, said the State agency, though the changes were spurred by the need to comply with a 2012 EU energy policy that requires Ireland to cut greenhouse gas emissions.

Ireland has 180 motorway junctions. Those created before 2007 required motorways to be lit three kilometres before junctions, though those built afterwards were to have lights only at ramps, and connecting junctions.

However, just a quarter of those built after 2007 were actually lit to the later standard. Instead, nearly half had bespoke lighting systems installed. Thirty per cent were built to the pre-2007 standards.

Four junctions were converted in a pilot programme: Junction 6 Balbriggan on the M1; Junction 9 Enfield on the M4; Junction 3 Rochfortbridge on the M6 and Junction 3 Athy on the M9. It has now been extended to 24 junctions.

Following a year-long test no negative results were found. Indeed, the new lighting is safer, said the State agency, because motorists face less glare and fewer lamp-posts are needed.

In addition to the elimination of surplus lighting, off-peak dimming at suitable locations and the use of LED light fittings is being explored. A pilot dimming project began on the M50 in 2017 and incorporates use of voltage regulation and dimming appropriate to traffic flows.

This week a care worker in the Midlands said he was shocked to notice the increasing number of darkened motorway junctions and was concerned they were more dangerous. However, a Transport Ireland spokesman said prior to this complaint there had been no complaints, and the safety research was all credible.

According to TII the following 24 junctions have had surplus lighting switched off as of the end of September 2018.