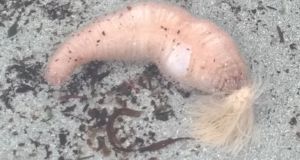 In mid-March my daughter found this creature while walking on the beach in Salthill, Galway. It was about 3 inches long. – Fran McCormack, Salthill, Galway
The marine biologists Brendan O’Connor and Eddie McCormack of Aquafact say that from the photo it looks like a sea cucumber. These are a worm-like species and are not often seen as they live in the sand. When disturbed they can extrude part of their insides. They belong to the same group, Echinoderms, as the sea urchins and starfish.

During March, this beautiful male pheasant, finely turned out and all set to mate, visits our garden every morning. He stands on a slightly raised manhole cover and surveys his territory. – Mairéad Ní Uiginn, north Leitrim

Could you identify the flower in the attached photo? – Paul Miller, Derrygonnelly, Co Fermanagh
Among the many yellow spring flowers it looks like coltsfoot.

We had been listening to this lone goose calling morning and evening earlier in spring, probably looking for a mate. However, a couple of weeks ago I saw him with a pen, behaving with the swan as if he had found a mate. He was pecking at a cob and attempting to feed in the same way as a swan but his neck was too short. – Paddy Demery, Kilcoole, Co Wicklow

This is a photo of what appears to be a dead porpoise on the banks of the River Dargle in Bray. I had never seen or heard of porpoises in Bray harbour or the Dargle. – Anne Marie Byrne, Bray, Co Wicklow
There are porpoises in Dublin Bay, and they may also come into Bray harbour. They stay out in 150-200 metres depth and rarely stray into shallow waters.

Something is destroying my Montbretia. Could it be a badger? – Mary McNelis, Carrick, Donegal
Yes, they eat the corms and take the plants for bedding.

Leaving Cert students must register for calculated grades by Thursday evening 19:04
Man admits rape of boy after drugging him with pain relief substance, court told 18:54
Tributes paid to Ireland’s deputy ambassador to China who died on Sunday 18:28
No acting the goat when it comes to cleaning up Cork graveyard 18:26
Man jailed for three years for ‘barbaric’ circumcision without anaesthetic 18:18