St James’s Hospital under investigation over demolition of historic houses 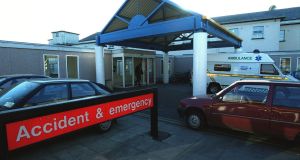 St James’s Hospital said the demolition, which took place one week ago over the weekend, was necessary to ensure public safety. Photograph: Alan Betson

The demolition of a terrace of historic houses owned by St James’s Hospital in Dublin is under investigation by Dublin City Council amid concerns the work was undertaken without planning permission.

The council had two years ago warned the hospital that demolition of the four 19th-century houses at Brandon Terrace, next to the hospital in Dublin 8, was not acceptable in principle.

However, the hospital said the razing of the terrace, which took place one week ago over the weekend, was necessary to ensure public safety.

The hospital bought 1-4 Brandon Terrace, and old industrial buildings to the rear of the houses, in 2014. It planned to redevelop the site for the relocation of adult hospital services to make room for the construction of the new national children’s hospital. However, it later decided it did not require the site immediately, and put its redevelopment under review.

The houses and other buildings on the site, which had already been vacant for several years before being bought by the hospital, had become increasingly derelict and subject to vandalism and illegal dumping.

In 2017 the hospital applied to the council for their demolition saying they had recently become “the subject of dangerous structural concern”. It told the council it wanted to level the houses and the rest of the buildings on the site, and would determine the use of the site at a later date.

However, the council said it did “not accept the principle of demolition” of the houses on the site. “The demolition of this terrace of houses is contrary to the retention and reuse of buildings/structures of historic value which make a positive contribution to the character and identity of streetscapes,” it said.

The houses were not on the Record of Protected Structures, but their destruction “would set a precedent for the demolition of historic structures, which are not protected structures, throughout the city”, the council said.

In January 2018 the council gave the hospital six months to submit a comprehensive historical survey of the houses and a “design rationale for the demolition of these structures”. It also instructed the hospital to consider “a revised proposal which does not involve the demolition of nos. 1-4 Brandon Terrace”.

One year later, in January 2019, the council wrote to the hospital to say, that as none of the above information had been submitted by the deadline, the application for demolition had lapsed and was considered to be withdrawn.

However, the hospital went ahead with the demolition work over the weekend of March 7th. In a statement the hospital said: “The derelict buildings were reduced to ground-floor level due to safety issues as the façade became unstable along the footpath to the schools.”

A spokesman for the council said there did not appear to be any permission in place for the demolition. “The demolition on this site is currently under investigation,” he said.