How to identify trees on a walk in Ireland 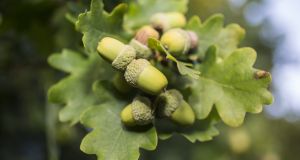 It’s easy to forget at a time like this that something as ordinary as the annual National Tree Week is taking place. As walking is one of the few activities still feasible, it’s as a good a time as any for us to get out and about to appreciate the trees in woodlands and parks throughout Ireland.

Nature writer and farmer John Lewis-Stempel recounts a fascinating story about how he managed to find his way out of a familiar forest at nighttime without a torch by remembering the different trees and feeling their barks and listening to how the wind moves through their leaf canopy.

Such multi-sensory nature observation skills might be rare but you can – with careful attention to leaf formation, bark texture/colour, flowers, fruit and general stature of trees – become good at identifying many Irish trees in mixed woodlands throughout the country.

“The easiest way to identify trees is by their leaves,” explains Éanna Ní Lamhna, nature writer and vice president of the Tree Council of Ireland. Leaves are either simple (one leaf) or compound, with several small leaves/leaflets splayed out from a stalk either opposite each other or alternatively arranged. Coniferous trees have pointy needles instead of soft, flat leaves.

“The oak and ash trees are the last trees in Ireland to get their leaves each spring and there’s a saying ‘the oak before the ash, we’ll have a dash. Ash before oak, we’ll have a soak’, which refers to whether we’ll have a dry or a wet summer,” says Ní Lamhna.

Smaller trees get their leaves before the larger trees in mixed woodlands, as otherwise the leaf canopy of the larger trees would prevent the leaves on the lower trees sprouting due to lack of sunlight.

Other ways to identify trees is to study their flowers and seeds. “Trees such as hazel, poplar, alder and birch that are pollinated by the wind will have catkins which appear before the leaves. But trees that are pollinated by insects will have flowers with petals to lure the insects in. These include blackthorn, hawthorn, elder and horse chestnut,” explains Ní Lamhna.

When it comes to seeds, they will either be spread by the wind (eg winged ash keys or helicopters from sycamore trees) or via birds who eat their berries (eg holly, hawthorn, elder, blackthorn, spindle or mountain ash) or via fallen nuts (beech, oak and hazel).

Identifying trees by their bark is probably the trickiest of all. A silver birch with its bright silvery bark is the easiest bark to identify. The russet red bark of a Scots pine is also quite easy as it towers above many other trees. Beech trees have smooth grey barks but many other trees including oak, ash and horse chestnut trees all have indented brown barks that change as the tree gets older and are harder to differentiate.

Having a visual reference is the best way to succeed in identifying different trees. So, if you can, borrow a guide book to Irish trees from your local library or purchase the National Biodiversity Data Centre’s Tree Swatch (biodiversityireland.ie/shop €6). This is essentially a set of cards that fan out with pictures of leaves, buds and flowers of different trees to help you identify them.

Alternatively, you can download the free app on tree identification from the British Woodlands Trust. This easy-to-use app helps you identify a tree either by the type of leaves, bark, flower/fruit or even a twig or branch.

Ash: Renowned for their strong wood used to make hurley sticks, ash trees are common in Ireland. They grow up to 45m tall and have up to nine small leaves (leaflets) on each leaf stalk. Small flowers appear in the spring which are followed by bunches of winged seeds.

Birch: Silver and downy birch trees are almost indistinguishable but downy birch is more common on hilly land or in the mountains while silver birch is frequently found in parks, gardens and along roadsides. Their silvery bark is a giveaway sign and their leaves are medium-sized with serrated edges. Flowers (catkins) appear in the spring, followed by hanging seed capsules.

Beech: With its tall straight grey trunk and full foliage, beech trees are easily identified. Their oval shaped bright green leaves have rounded edges. The beech nuts (seeds) encased in prickly husks appear in the late summer and fall in the autumn.

Oak: Regarded as Ireland’s national tree, oak trees live for 200-250 years and often sit magisterially in parklands. Their leaves are divided into several rounded lobes with acorns (seed pods) growing in the centre of a stalk of three leaves.

Sycamore: Another large canopied tree which often stands alone, sycamore trees have dark brown bark and large leaves which span out like fingers with pointed edges.

Larch: Although they shed their leaves (or needles) in the winter, European and Japanese larch trees are coniferous. The light green delicate needles which appear in the spring turn golden before they fall in the autumn months. Their cones, which hold the seeds, sit upright on branches interspersed with needles.

Scots pine: One of the tallest of the evergreen trees with its leaf canopy often only at the top of tree, this is perhaps the most easily identifiable evergreen tree. A native to Ireland, it has a rich red/brown bark and a bunch of needles which hold their cones towards the top of each twig.

Yew: A full-bodied dense tree that barely lets the light through it, yew trees are traditionally found in graveyards. They have a deep red/brown bark and needles than span out on a stem, carrying bright red berries. Yew berries are poisonous to humans and cut foliage is poisonous to animals.