Counting hares under the spotlight 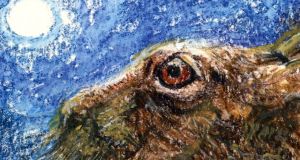 In an early initiation into sheep-country nightlife, I was awoken on a winter night by a sudden blaze of light beyond the bedroom curtains. Peering out, I found a 4x4 parked opposite our gate and a mounted spotlight probing the rough hillside across the road.

The gun patrol didn’t pause long. Failing to raise any foxy form or eye-glint among the rushes, the rifle was lowered and the sheep left to resume their digestive doze in the dark.

Not all nocturnal spotlights have been so intently malign; quite the contrary. Until recently, they also seemed the best way of counting Irish hares, always a challenging undertaking given the animal’s historical swings in population.

Thus, a national survey in 2007 divided the countryside into mapped grid 10km squares and used a powerful spotlight “from point transects located along minor roads”. The hares are most active between dusk and midnight again in the half-light of dawn.

The results were worth having but limited in their coverage: would the camera traps of so many TV wildlife films give a more thorough picture? An eight-strong cross-Border team assembled by the National Parks and Wildlife Service (NPWS) set out to compare the two methods in a new national survey (Irish Wildlife Manual 113 at npws.ie).

Despite threats from farming, traffic and a viral disease, the hare's conservation status is reckoned favourable

A pilot survey used a mobile “two million candlelight spot lamp” shone in two-minute bursts from along minor roads. The cameras, fixed at random to cover the same area, were strapped low on trees, bushes and fence posts and triggered by movement to record 15-second videos.

After 4.3 survey hours, observers behind the mobile spotlight had recorded 84 individual animals – hares, fox, badger and rabbits. In contrast over the same areas, 59,000 video hours from 351 cameras recorded 2,604 individuals of 12 species, including 20 times more Irish hares, lots of farmland birds, and 1,800-odd rabbits (this from inadvertently fixing some cameras next to a warren).

Then came the full camera survey, using 596 cameras deployed at random within 44 squares and yielding some 106,000 video hours – the equivalent of about 12 years of continuous observation. It found 253 hares, compared with nine in the spotlight pilot survey.

Scaled up by the area of each geographic region, this estimated that the Republic had some 223,000 Irish hares in the winter of 2018/19. They were more numerous in the north and west but showed the widespread grassland distribution typical of the Irish species. Despite threats from farming, traffic and a new rabbit viral disease, its conservation status is reckoned favourable and stable.

Arrays of camera traps are now used as a regular part of hare monitoring, especially to judge the impact of the new haemorrhagic disease. If the camera specified in the team’s report is the American “deer trail” camera I matched online, it retails at $160, complete with a year’s battery.

Hi-tech ecology is already at the command of the NPWS in certain of the six-yearly checks on species that satisfy the EU’s long-standing habitats directives. Counting, say, a particular endangered plant on Ireland’s sand dunes still demands a pair of consultant botanists trudging up and down geometrically for hours and days, but a census of seals needs more costly attention.

Recently in this column I speculated on the predatory appetite for seal meat of the orcas – killer whales – that we share with Scottish waters. New research from the University of Aberdeen has potentially linked the orcas to a dramatic decline in numbers of Scotland’s harbour seals, with numbers in Orkney and Shetland dropping by 40 per cent in five years.

The harbour seals totalled 4,007 and the greys 3,698, the highest counts for both species in summer

I suggested it might be necessary to check again on the numbers of Ireland’s harbour seals. But this overlooked a recent survey for the NPWS of both grey and harbour seals, using thermal imaging from the air. It was the third such nationwide survey in summer and was carried out by the Sea Mammal Research Unit of the University of St Andrews in 2017 and 2018.

Flying in the peak harbour seal moult season in August and early September, the team’s helicopter carried a multi-camera, gyro-stabilised gimbal (you will want to know this) containing a laser range-finder, a colour HD digital video camera, a mid-wavelength thermal imaging video camera and a digital camera with a 300mm telephoto lens!

Predictably, most harbour seals were hauled out in sheltered corners of the coast, while most large groups of grey seals kept to more exposed shores, rocky reefs and offshore islands. The harbour seals totalled 4,007 and the greys 3,698, the highest counts for both species in summer. Adjusting for the greys’ different time ashore in summer, they outnumber the harbour seals by two or three times.