Why are we having such spectacular sunsets? It’s all down to the light . . . 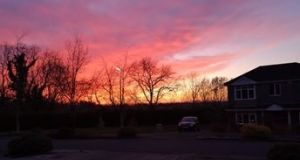 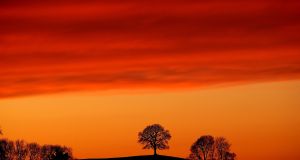 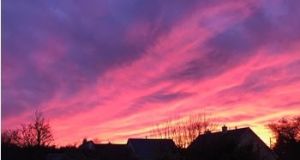 The sunset seen over houses in Tuam, Co Galway, on Friday. 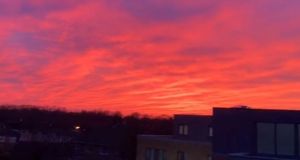 The sun sets over the Navan Road, in Dublin on Friday. Photograph: Michael Brady 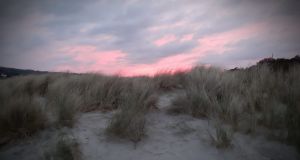 Dramatic sunsets which have draped vivid warm colours over Irish skies in recent evenings are set to continue until Monday evening, forecasters are predicting.

Intense hues of yellow, orange and red have been lighting up dusk around the country, briefly distracting from the dark mood felt by many underneath the skies.

But why are the sunsets and sunrises so dramatic at the moment?

Well, the answer, according to Met Éireann meteorologist Siobhán Ryan, is partly to do with the current weather and also the time of year.

The country is enjoying a couple of relatively settled days and this dry, calm, still weather “scatters the light” molecules in a different way and also changes the directions of light rays, she says.

Jesus lads, that was some sunset over Ireland tonight! pic.twitter.com/VrPN5hIk0P

“Our eyes are sensitive to the wavelengths in that and the different colours associated with different wavelengths, which bend in different directions.”

Both at sunrise and sunset, light has to travel a greater distance to reach our eyes, than during the day, when it is more directly overhead.

So more of the blue – that we see in a cloudless sky – gets filtered out. This reveals more of the warmer colours of the rainbow that make up light.

Because we are coming into the spring equinox, there is also more sunlight and the sun is higher in the sky.

“On Friday there were quite spectacular sunrises and particularly sunsets around the country,” says Ms Ryan.

“The east coast probably saw the best sunsets, as there was cloud rolling up from the south of the country.”

And, says Ms Ryan, we can expect to see more of the same as an easterly airflow will likely keep the air dry and clear, before conditions change on Tuesday.

“Eastern and southern counties and maybe inland could expect some fairly spectacular sunrises and sunsets to come,” she says.

“Nice springy weather” being enjoyed in many counties since Sunday, with temperatures jumping into double digits, is expected to last until Tuesday when rain is predicted to move across the country.