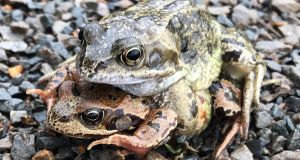 In our garden on Howth Head we occasionally have had a red squirrel, but this year a grey has appeared. I wondered if the red squirrels are being displaced by the greys? Billy Quinn, Baily, Dublin 13
There is no suggestion yet that the Howth reds are threatened

This is a daily visitor to our garden looking for lunch. So far the finches have been too quick for him. Alan Marshall, Rathfarnham, Dublin 16
A handsome female sparrowhawk.

I almost stood on this pair of frogs on Sliabh Bán, Roscommon. Their colours were fascinating. – Padraig Gubbins
Great photo of frogs in amplexus. The male seems to have grabbed the female before she got to a pond.

On a sunny, sloping field near Tramore, Co Waterford, I saw about 100 curlews feeding. They flew up, banked, wheeled and landed. They were magnificent in the bright sun, sometimes black, sometimes grey. – Rosemary Ryan, Tuitestown, Kilkenny
They were winter visitors from the Continent.

I noticed a blackbird beside the garden pond, jumping and pecking at what looked like a large, wriggling worm. On investigation it turned out to be a brook lamprey. It is the time of year when these primitive fish emerge to mate. How it got into the pond in the first place is quite unknown. – John Lucey, Dukesmeadows, Kilkenny
A pair of brook lampreys usually spawn in nests they build in shallow streams. The eggs hatch in a few days and the larvae live buried in the sand for anything from three to seven years. They then metamorphose into adults and emerge into the water to spawn.