Prof Katharine Hayhoe: Where to find hope that climate crisis will be addressed 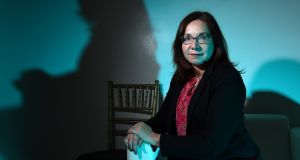 Katharine Hayhoe concealed her email address online but the vitriol that followed her just shifted to social media, where she continues to deliver her message in spite of having to block up to 100 people a day. Photograph: Matt McClain/The Washington Post via Getty Images

The number one question is the same wherever Prof Katharine Hayhoe goes: what gives you hope that the climate crisis will ever be addressed?

The answer from one of the world’s most influential climate scientists is “you have to go out and look for it”, but don’t look to politicians, as climate politics is getting more and more contentious.

Nor is it found in the latest science, which confirms global heating happening at a faster rate than previously predicted, with much wider impacts.

Rather it’s to be found in the countries – states, businesses, churches, universities and individuals – taking action, and especially those showing leadership though those entities.

She was in Ireland this week to give eight different talks over five days – in UCC, NUI Galway, and Queen’s University Belfast, with Trinity College and Maynooth University addresses on Friday livestreamed because of coronavirus.

They ranged from “why facts are not enough” to “climate science: what’s new?” to the role values play in shaping conversations on this existential threat to humankind. Her presentations show an acute understanding of how climate disruption is affecting Ireland and its response so far.

Hayhoe is an atmospheric scientist and director of the Climate Science Center at Texas Tech University specialising in climate impact assessments and translating climate projections into actionable information.

She is also a renowned science communicator and an evangelical Christian who retains a fearless ability to speak out. She concealed her email address online but the vitriol that followed her just shifted to social media, where she continues to deliver her message in spite of having to block up to 100 people a day.

It may be because so many Americans view religion and science as being in conflict with each other. For Hayhoe, such a juxtaposition doesn’t exist. Her father was a missionary and a science educator, so she grew up seeing them as intrinsically intertwined.

Her verdict is delivered with disarming simplicity: The climate is changing, it is human caused, the impacts are serious and it’s time to act. A thermometer is not liberal or conservative. She endorses the view “to deny climate change is to deny a truth we have just lived”.

The most important thing about climate change is to talk about it. There are three choices; mitigation (cut carbon emissions); adaptation to an overheating world, or suffer. “The more we mitigate, the less adaptation we have to do and the less suffering.”

The new discipline that must be brought into deliberations is social science, she adds, as inaction has persisted given it was known as far back as the 1850s that burning coal generated heat-trapping (greenhouse) gases, and the same soon applied to oil and gas. So “It’s more about psychology than physics and chemistry, and why we have not taken action”.

Hope is not enough. Yes, there is progress, Hayhoe accepts. For too long it was about pushing a large boulder uphill. The peak has been negotiated, the boulder is now rolling downhill but not fast enough – though there are millions of hands assisting it.

It’s an issue of implementation and overcoming obvious blockages such as the 100 corporations responsible for 70 per cent of global carbon emissions; “that balance of power and wealth concentrated in the hands of a few who want to maintain fossil fuel use for as long as possible”.

The battle to end fossil fuels, in her view, is not yet won. Oil giant BP – generating emissions on a par with Australia – committing to becoming carbon neutral by 2050 is welcome but “I don’t know if they know how they are going to do it. But it’s a step in the right direction.”

She is not drawn into the issue of US President Donal Trump’s denial of climate science, and notes climate change was the number one issue during the second term of Barrack Obama, where tangible results were limited.

Hayhoe is more heartened by those entities across the US who make up the “we are still in” the Paris Agreement alliance, and actions such as those in her native Canada and even Ireland on carbon pricing (implementing carbon taxes) and divestment from fossil fuels. “There’s hope there.”

If Trump is not re-elected, it will send a message to countries, “the US as a whole is with them again”. Already, 58 per cent of Americans are now either “alarmed” or “concerned” about global warming.

On forcing emissions down, she points to success in electricity generation, from the deployment of technologies across the world that is decarbonising and making power cheaper than using fossil fuels.

On the big bet on carbon capture technology, she stresses what one does with the carbon is critical. A lot of people, especially Republicans are raving about the coal-burning plant Petra Nova in Texas but “the CO2 recovered is used elsewhere to pump into wells to enhance oil and gas recovery so it’s net effect is to increase emissions”.

Forestry is not as good as previously believed but helps capture carbon, while trapping it in soil is good, she says.

On Ireland’s performance, Hayhoe notes an EU survey showing the country was in the bottom three countries on awareness of the need to reduce emissions and yet is in the top three on willingness to make personal changes and do more, which was ground for optimism – notwithstanding high emissions being currently generated.

On individual action, her take is precise. “The reality is that we all make a difference” but individual choices – like becoming a vegan and not flying – is simply not sufficient. Do the sums on emissions shows aviation is responsible for just 3 per cent of emissions; animal production generates 14 per cent, so “system-wide change is required”.

She has no time for heaping blame on individuals, when comparing the average person’s carbon footprint to those mega-wealthy corporations dominated by oil and gas companies, who for example, continue to actively invest in preventing solar energy being put into electricity grids.

“Individuals do matter...° the most important thing is to use your voice for systemic change,” Hayhoe believes.

When asked by people what gives her hope, she turns the question around and polls people in her lectures. They see cause for hope in seeing others act and so act themselves. But the “young people and the next generation” factor constantly comes out top in responses; “not that they will fix it, but we will fix it for them because they exist”.

Her key actions list is: talk about climate change to those you know to help people understand the relevance to them, to collectively address “the identity politics barrier” and to inspire with readily available positive solutions.