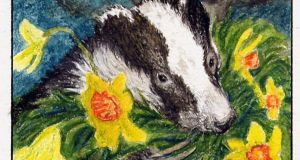 Once a local badger chose to wrench a bunch of leaves and stems from a stand of flowering daffodils.

My morning foray to the rain-gauge, measuring tube in hand, is a plod along a well-worn, muddy track in what used to be the lawn. Head bowed to the wind, I find the grass pitted here and there with shallow black holes the size of a badger’s snout.

This is the sign, on the eve of spring, that a local badger has returned for a while to an old, deserted sett deep in the willow thicket beyond the fence. The holes are its excavations for grubs, sniffed out from the surface.

In some years, the animal decides to renew the comfort of its bed below ground. I encounter clumps of leaves and dry grass, dragged from under a hedge and dropped along the way. Once, it chose to wrench a bunch of leaves and stems from a stand of flowering daffodils, a vandalism that prompted a colourful illustration in the column to brighten a gloomy spring.

This one finds both badgers and humans waiting on some security from plague. For people, a somewhat remote vaccine could bring a shield from Covid-19. Badgers now at last have a vaccine against bovine TB (a bacterium, not a virus), but how widely the Government commits to its use in a switch from years of snaring and culling remains in question.

“It is accepted that Ireland is now at a critical juncture in attempting to eradicate [bovine] TB” says a briefing to the farmer stakeholder forum established by the Department of Agriculture, Food and the Marine in 2018.

The disease is dropping below its reproduction rate and infected herds are at historically low levels. With current cattle controls, however, eradication helped by badger vaccination “would likely still take several decades”.

In some 70 years of Ireland’s eradication programmes, the lack of industry involvement and consultation has been a national handicap. In some countries, notably Australia and New Zealand, development of policy has been shared with farmers. Australia has eradicated bovine TB, while New Zealand has cattle infections well in decline.

Leading vets from both countries are among speakers invited to a major international conference on bovine TB scheduled for June 8th-11th in NUI Galway (its confirmation, as I write, is at the mercy of Covid-19).

The Government is committed to the eradication of bovine TB by 2030. But that target’s feasibility, based on current knowledge, has been challenged by Prof Simon More, head of UCD’s national centre of veterinary analysis. In the rolling out of badger vaccination, he finds policy “at a critical decision point”.

Among his reservations are the role of Ireland’s sika deer as a host for bovine TB. Evidence for it is lacking over most of Ireland and still uncertain even in reputed “hot spots” in Co Wicklow, but research is still inadequate. And the need for more intensive, risk-based controls must take account of some 1.3 million cattle movements in a year.

Enough of such dismal inquiry, prompted by holes in the grass. From the privilege of a highly scenic rural isolation, have I nothing to lift the mood? For a start, there’s one new book to offer solace, example and good company.

A Natural Year (Merrion Press, €17.95) is by Michael Fewer, long an eloquent observer of the Irish landscape and wildlife. There is also something prescient about a book, in print on the very eve of a pandemic, pledging “the tranquil rhythms and restorative powers of Irish nature through the seasons”.

Fewer, an erstwhile architect and still a great drawer of birds, has a home in a leafy south Dublin, a holiday cottage in rural Waterford and generous gardens in both. His daily encounters with the natural – and cultivated – world around him have a close but unforced awareness that rewards a slow, absorbed read.

The warm, rich habitats he shares with wildlife make his comments on the sharp decline of Waterford’s summer moths and the bats that prey on them all the more disquieting. They point up another suggestion for turning to nature in refuge from current events.

As part of the all-Ireland “pollinator plan”, the National Biodiversity Data Centre is out to recruit citizen scientists prepared to watch a patch of garden or hedgerow flowers for a measured 10 minutes to count every insect that lands on one of them (a busy bumblebee is counted once).

The flower patch should be 50cm x 50cm and the watches should be made on good, sunny days between April and September. For a list of suitable target plants, with a guide to the various kinds of insects and details for recording them, visit pollinators.ie.