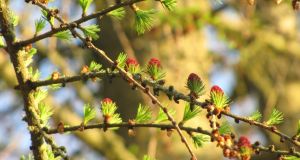 ‘Roses’ on a larch: the female cones are very beautiful at this time of year, but often overlooked. Photograph: Paddy Woodworth 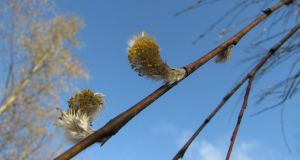 “The sap is mounting back from that unseeness

Darkly renewing in the common deep

Back to the light, and feeding the pure greenness

Hiding in rinds round which the winds still weep.”

For weeks now the buds on trees have been swelling, suspending their almost visible urge to burst out into leaf until light and heat come just right. Thrushes have been testing out their songs with increasing confidence. The lesser celandine, which surely chants “spring” more clearly to us than any other wildflower, has actually been discreetly blossoming since December, but only at select locations. Now its golden blooms are more widespread by the day. Soon it will be blazing out from every roadside hedgerow.

Spring does not follow a mechanical calendar, bursting out just because we decide to put our clocks forward this weekend. But the fact that sunrise on Monday, at 7.04 am, will suddenly be much closer to our average rising time does send out a kind of social signal to clock-bound humans that the year has turned.

And the blessed delay of sunset, to 7.54pm, gives many of us an extra hour of light after work to witness the heart-lifting annual resurrection of plant and animal life, so much of which has been lying dormant, or apparently so, for several months.

Irish nature, to be sure, is only gaining five minutes of solar exposure per day, but for humans who aren’t used to rising with the sun, Daylight Saving Time seems to have given us two whole extra hours, overnight. And it’s a welcome gift because April offers exceptional conditions for seeing many plants and animals at their freshest moments of beauty.

Exceptional, a little paradoxically, precisely because most plants are not yet in foliage. So those that are emerging, though rapidly increasing in numbers, stand out very conspicuously. As do the insects, birds and animals that are moving among them in the brighter light the season brings.

If you have become familiar with the common spring flowers, finding more of them in bloom each time you take a familiar path is a little like greeting returning friends. The accelerating procession of species in a woodland, from celandine and spurge to wood anemone and bluebell and unfurling ferns, never follows exactly the same pattern, and that’s part of its fascination.

Some plants are particularly fickle. A grassy slope that shone with early purple orchids last year may be empty of them this time around for no very apparent reason.

With current shifts in global temperature, of course, most plants are tending to appear earlier than they used to. Recording these shifting patterns – a science called phenology, in which citizen observers can play a vital role – has become one of the key indicators of climate change in temperate and northern regions.

It’s not just plants, but animals too that make return appearances at this season. And again the changing times at which they do so give us valuable clues about the changing state of our world.

As the flowers come out, pollinators come into play. A number of butterflies will already be on the wing, depending on the day’s weather, and the queens of several species of bumblebee will be out and about. If you let the dandelions flourish on your lawn you should find the latter quite easily.

Many of our trees and shrubs are much slower to come into leaf and flower than smaller plants. Hazel, however, which brightens up so many late winter hedgerows with its brilliant yellow lamb’s tail catkins, is already passing its peak blossom time, though its leaves are only just beginning to peep out of their buds. Meanwhile, willow catkins dust the landscape with subtle silvers and golds.

Perhaps our most spectacular native flower shrub at this time of year is the aforementioned blackthorn, whose flowers again usually appear before the leaves and lattice our hedgerows with frothy white in April. These blossoms are so common, and individually so small, that it’s easy to take them for granted. But look at them through a hand lens, or at Carsten Krieger’s radiant cover photo on Declan Doogue’s The Wild Flowers of Ireland, and you’ll marvel at their exquisitely delicate structure.

The larch, an imported but now common conifer that sheds its needles in winter, does not produce true flowers. But the fresh pink female cones in April are sometimes called “roses” with good reason – they are very handsome, though often overlooked.

Our culture strongly associates spring with sex because of the promiscuity of plants, but some other mammals with long gestation periods have already put those thoughts behind them. They are focused on the serious business of giving birth and raising young. So look out for fox cubs, even in suburbia, in the early mornings and longer evenings.

Meanwhile, much bigger mammals are now on the move around our shores, especially Risso’s dolphins and Minke whales.

After plants it is undoubtedly migrating birds that are most likely to remind us that spring is coming. We looked at 10 avian visitors, some common, some rare, and all charismatic, on these pages two years ago https://www.irishtimes.com/news/environment/the-swallow-has-landed-10-birds-to-spot-in-ireland-in-spring-1.3449442

But spring is also a very good time to find two rather special resident birds that can be very elusive for the rest of the year.

The enigmatic woodcock is a nocturnal game bird, very like an overweight snipe, whose cryptic plumage makes it almost invisible on the forest floor. At dawn and dusk, however, the male makes conspicuous and comically awkward display flights above woodland edges, calling like a tormented ghost to attract females.

Meanwhile, the male great spotted woodpecker, hidden in the canopy for much of the year, spends early spring mornings “drumming” loudly on tree trunks with the same intent.

In our scarce native woodlands these sounds can become as emblematic of April as the first primroses or the cuckoo’s calling.

There are a number of resources to guide you towards exploring nature month by month.

For younger readers, Juanita Browne’s The Great Big Book of Irish Wildlife Through the Seasons is a delightful introduction.