Spring has come early to Sutton, the cowslips are out

Eithne Viney: on a blue tit fighting with itself, sociable herons, and frogspawn in Wicklow 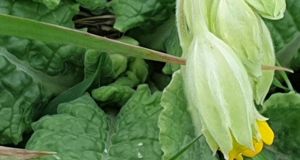 Spring has come early to Sutton. My neighbour’s clematis montana rubens is already in full bloom, and cowslips are out in good numbers at Red Rock. I’ve never seen them in bloom so early. Frank Smyth, Sutton, Dublin 13

I found this washed up on the strand near Kenmare and wondered what fish it came from. Ivan P Pawle, Kenmare , Co Kerry
It’s the egg mass of the common whelk.

The blue tit in the photo seems to be having a difference of opinion with its reflection in the mirror in our garden. What is going on here, and is it cruel?Michael Collins, Dangan Ave, Dublin 12
The tit thinks its reflection is an interloper in its territory. It could be cruel if the bird never gets used to it.

Last month I saw about 10 herons flying out of tall trees. Before Christmas I saw three there, but normally I see them alone. It was amazing to see 10 or 12.
Rosemary Ryan, Tuitestown, Co Kilkenny
Herons are sociable birds when nesting and build their nests in tall tree about 25m off the ground. Heronries can contain enormous numbers of nests – one in Kent contains around 150 – but 10 to 12 is pretty normal.

On a walk in Trooperstown towards the end of last month we came across numerous ditches and ponds with two different types of frogspawn that seemed viable. Are they both from the same type of frog? Peter Bishton, Trooperstown, Co Wicklow
They look like spawn at different stages of development. We only have one kind of frog.

It was heartening to see that the overwintering swallows seen flitting over the river Corrib in Galway (Eye on Nature, January 18th) have put in an appearance again on March 3rd after a week’s absence. Niall O’Donoghue, Galway
Great to hear that they have survived the February storms.