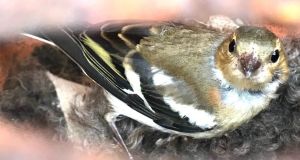 This bird is recovering after crashing into the kitchen window. The beak and tail are long. – Valerie Collins from Killorglin, Co Kerry.
It’s a juvenile yellow wagtail. They are fairly rare around the country but established in south Kerry.

I have noticed these fellows in my garden in the last two to three years. They act like horse flies and persistently give a bad bite. – John Moore from Boyle, Co Roscommon
The twin-lobed deerfly is not as well known as the cleg and the other horseflies – but is just as voracious.

This plant first appeared in my garden last year. The Clontarf Garden Society identified it as stinker plant/voodoo lily. – Ann Charles from Mount Prospect, Dublin 3
The voodoo lily is noted for the rotten smell from its large flower.

I saw these caterpillars on what looks like ragwort leaves; what are they? –Kay Moran from Ballyvaughan, Co Clare
They are the caterpillars of the lovely blue and pink cinnabar moth.

I found this in Corcagh Park, Clondalkin. It looks like a cross between a few different bugs. – Anna Garrett (7) from Dún Laoghaire, Co Dublin
It’s one of the four stages of the larva of the 7-spot ladybird, called an instar.

I found this lovely moth hiding in the garden. It was about 3 inches long. – Patrick O’Donnell from Ashford, Co Wicklow
The male ghost swift moth is named for its ghost-like, hovering flight, rising and falling slowly over vegetation at dusk.

There were several requests for the identification of the six-spot burnet moth. This photo was sent by Denise Kilcoyne from Macetown, Co Meath.

Ethna Viney welcomes observations and photographs at Thallabawn, Louisburgh, Co Mayo, F28 F978, or by email at viney@anu.ie. Include a postal address ,please.