Protestors scaling up action because Programme for Government not radical enough 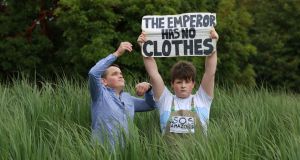 Student climate activists will resume their weekly “school strike for climate” outside Cork City Hall on Friday, the first time since the Covid-19 pandemic forced them to move their protest online.

The protesters said they were scaling up their action because the Programme for Government was not radical enough in addressing the climate crisis, while the world continues to overheat with record temperatures in the Arctic this summer.

This will be week 78 of their protest, and although lockdown interrupted their usual weekly gatherings the organisers said in a statement they were confident it would not hinder the movement in the long term.

Social distancing measures will be in place and participants will be required to wear masks and to maintain a minimum of two metres of distance from others from different households.

“This new Government has promised to address the climate crisis, though the actions outlined in the Programme for Government were not radical enough. We will continue striking in order to hold them accountable to their commitment to climate action and to the 1.5 degree target,” said school striker Darragh Cotter (18).

“This week’s strike also comes in the midst of an unprecedented Arctic heatwave, with temperatures of 34 degrees being recorded at a latitude of 73 degrees North in Russia on June 30th, said Saoi O’Connor (17), who was among the first Irish students to leave school in solidarity with the Swedish activist Greta Thunberg.

“The current arctic temperatures remind us that although we now face another global emergency, the climate crisis has not gone away, and we cannot afford to allow one crisis to halt action on the other. Both are crises and must be treated as such,” she added.

The crises must be acted upon “in accordance with the best available science, with justice and empathy at the core of our response”, she believed.