Another Life: As one of many of the world’s declining seabirds, puffins are now receiving much more necessary and serious attention 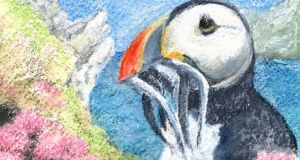 Puffins visit land only to breed, nesting in burrows and crevices. Illustration by Michael Viney

“I was trying to remember today how the colours are banded on the puffin’s curious triangular bill: was it red-yellow-blue or blue-yellow-red? So I descended the northern cliff for a closer look at them.

“I was not put off by its precipitous plunge and the boiling of the sea below, but made my way down cautiously, kicking my boots well in at every step. At about a hundred feet down I found myself at the flight-level of the puffins.

“These gay little auks fly in wide ellipses between cliff and sea, seeming without purpose and indefinitely, but it is not easy to follow an individual puffin for their whole circuit of a teeming merry-go-round.

“They were flying so close to me today, within a yard or so, that I could see them glance at me as they passed. Their flight is quicker than one thinks for all its apparent whirring clumsiness, so that trying to note the permutation of their bill colours was like trying to read the title on a revolving gramophone record...”

That was me, a mere half-century ago, a solitary young eccentric camped on a Blasket island and pursuing this trivial and risky impulse. Why not stay on the clifftop, lying among the sea-pinks, to watch them perch outside their burrows in the evening sun? I must have forgotten my binoculars.

Puffins, one of many of the world’s declining seabirds, are receiving much more necessary and serious attention. Like others – petrels and shearwaters, for example – who visit land only to breed, nesting in burrows and crevices and using darkness to dodge their predators, they invite challenging questions. How many are there, where do they go in winter, and what threatens their populations?

The latest report on our breeding seabirds, from the National Parks and Wildlife Service, speaks of the “cryptic breeding ecology” of this 20 per cent of burrow-nesters and waits on the results of ongoing surveys.

In the last big census attempt, Seabird 2000, many Irish islands proved too hard to land on or were beyond the capacity to organise. Puffins, in particular, were nesting on dangerously steep slopes and inaccessible clifftops. Playing tapes of recorded calls brought responses from most of the “apparently occupied burrows”, numbering more than 16,000.

Since then, more intensive and hi-tech surveys by researchers at University College Cork suggest that some population figures for burrow-nesters have been gross underestimates. UCC’s Gavin Arneill and a fieldwork team found almost 4,000 pairs of storm petrels nesting on High Island, off Connemara, compared with the Seabird estimate of 22.

UCC’s Dr Mark Jessop, an Australian zoologist, has worked with colleagues to track the winter travels of Irish puffins, their bright summer colours dulled or discarded. Tagging dispersing birds with GPS locators, he found puffins from Skellig Michael flying the Atlantic as far as Canada and Greenland to feed on shoals of oil-rich capelin.

In 2017 came an international study, led by Oxford University and involving UCC, that had tracked 270 birds from 13 puffin colonies in North America, Norway, Iceland, Greenland and Ireland. While US puffins migrated several hundred kilometres at most, birds from Ireland travelled up to 4,700km on return flights across the Atlantic.

This, Jessop says, could leave the puffins too tired to breed when they arrive, barely able to lay one egg and forage food for a single chick. This could help to explain falling numbers at many Irish colonies.

Floating on the tides

Another recent study, by UCC researchers and the Zoological Society of London, found that puffins from colonies at the Saltee islands, Co Wexford, use strong tidal currents to float, rather than fly, between areas where they could dive most successfully for sand eels. This saves them substantial energy.

On the Great Saltee Island – a special area of conservation for birds – predation by rats has reduced breeding puffins from 2,000 to 50 birds. On the more remote and rat-free puffin cliffs, the main predators of eggs and chicks are the great black-backed gulls, breeding elsewhere on the island.

Storm petrels and shearwaters return from fishing to feed their chicks under cover of darkness. But puffins bring beakfuls of sand-eels to the burrow by day and roost offshore at night. The single chick, however, takes its crucial first journey to the sea under darkness, having been left alone to get hungry.

A witness to this was the Welsh ornithologist Ronald Lockley. In his classic Letters from Stockholm (1947), he told of measuring the period of the parents’ desertion by pushing matchsticks upright in the mouths of marked burrows.

At length, in late July or August, several days after the last flattening of the matchsticks, the chicks emerged at night “to blunder onwards and downwards until they could at last flutter over the cliffs to the sea”.