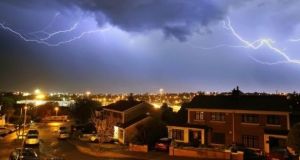 Met Éireann has issued a status yellow thunder warning for the whole country from Thursday evening until Friday morning at 9am. The thunder warning is also operating in Northern Ireland.

Heavy thunderstorms were expected to develop later on Thursday and Thursday night, with some severe downpours, hail and spot flooding.

Due to the localised nature of thunderstorms some parts of the country will remain dry. The thunderstorms are expected to peak at between midnight and 2am on Friday morning.

They will herald a dramatic change in the weather, with temperatures plummeting in parts of the country by up to 10 degrees.

It will still be warm and humid in the eastern half of the country on Friday, with highs of 24 degrees, but turning cooler and fresher in most of Connacht and Munster, with temperatures only ranging from 15 to 19 degrees.

Saturday will start out with sunny spells and isolated showers, with the showers quickly becoming widespread, heavy and frequent. Temperatures will be between 14 and 18 degrees at best, highest in the southeast.

Sunday will see further showers, although they will become somewhat less frequent as the day goes on.

The first day of the general lifting of travel restrictions on Monday will see dry weather, but it will be cooler than normal for the time of year, and unsettled weather with rain and showers will continue in to the early days of next week.