Another Life: A new book on the founders of the Tyler Prize shows their political influence 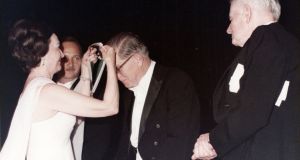 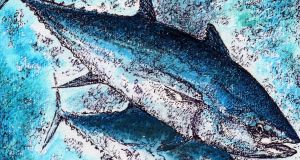 The spawning grounds of bluefin tuna are under threat as the USA’s National Marine Fisheries Service plans to open them up to pelagic longline fishing. Illustration: Michael Viney

Trump had little option, since the Bill, introduced by a Republican senator, was overwhelmingly approved by bipartisan votes in the Senate and House of Representatives. Unusually, the White House issued no presidential remarks on the signing.

“As of May 2020,” says Wikipedia, “the Trump administration has rolled back 64 environmental rules and regulations, and an additional 34 rollbacks are in progress.”

The New York Times, in Trump’s mind the malign purveyor of “fake news”,listed all of them on May 20th. These rollbacks weaken limits on energy emissions, relax rules on air and water quality, and undermine protection of wetlands and wildlife. Many have been resisted, and some of the rules have been reinstated through challenges at state level.

Such background tempered my reading of a new book by John Wilson Foster, a visiting research professor at Queen’s University Belfast. Retired to Co Down after a long university career in Vancouver, he was commissioned to write a history of the Tyler Prize for Environmental Achievement. The annual prize, established in California in 1973, was initially set at $150,000, even more than a Nobel was worth.

Foster’s book, The Space-Blue Chalcedony: Earth’s Crises and the Tyler Bounty, is published by the Tyler trust and sold by Amazon. It makes no mention of Trump but tells of Republican politics in Hollywood high society and its somewhat exotic part in the advancement of science.

The founders of the “bounty” were Jack and Alice Tyler, both now interred in the Great Mausoleum of Forest Lawn. Jack began life in a sod house in Dakota Territory and ended in a Bel Air mansion as boss of a farmers’ insurance corporation with assets of $1.3 billion.

Alice, his third wife, was inherently alert to nature and to God’s will and reincarnation, but was also childless. She was the driving force in dispensing Tyler bounty. There was, writes Foster, “a serious culture of philanthropy that flourished in southern California”, and Alice gave to everything from youth groups, music and the arts to the care of meerkats in the zoo.

The spur for an ecological prize was the pollution of Los Angeles smog, which followed the Tyler yacht far out to sea. Established with Jack’s gift of $5 million, the award was administered at first by a private Christian university, the Pepperdine. It was launched in 1973 by then governor of California Ronald Reagan, one of Alice’s many Hollywood actor friends, whom she had first urged into Republican politics.

Submissions for the award flowed in from many countries. Today, governed from the University of Southern California, its openness to interlocking sciences aspires to “an audit of the natural world”.

The record of almost 80 laureates, often sharing awards of cash and a medallion, can be explored on Wikipedia. It began with researchers in ecology and air quality, but the growth of environmentalism took it into public health and plant genetics and increasingly into climate change.

Others were rewarded at critical junctures of research, well explored and related in Foster’s book. He offers some good human touches. The 1984 award, for example, gave Edward O Wilson the money for a home library, in which he wrote his first masterwork (on the life of ants).

The 1992 prize rewarded Robert White, who organised the first World Climate Conference in 1979. And last year’s award to Michael Mann notably confirmed the rejection of climate denialism, the “lopsided civil war being waged in science”, as Foster describes it.

The trust’s academic independence seemed clear from the start. Its first award co-winner, in 1974, was Robert Strong, veteran of Earth summits and an advocate of radical economic change. It would not have matched the frontier Republican politics of Jack and Alice.

“They believed,” says Foster, “that a reorganisation of priorities, progressive scientific expertise, goodwill and bountiful philanthropy on the part of the wealthy could carry the day.”

And the bluefin tuna of my painting? They figure in the environmental cutbacks listed by the New York Times. A current legal action opposes plans by the National Marine Fisheries Service to open the tuna’s protected spawning grounds to pelagic longline fishing. This, argue two NGOS, is contrary to international treaties of tuna conservation.

A co-defendant to their action is Wilbur Ross, Trump’s commerce secretary. His busy financial life has also left room for philanthropy. He is, for, example, president of the American Friends of the René Magritte Museum in Brussels. The work of this famous surrealist painter expressed a sharply absurdist view of the world.

His paintings, by an irony, turn up from time to time in commentaries on Donald Trump’s surreal relationship with the truth.