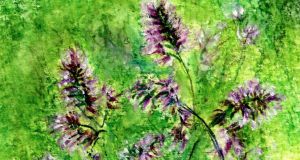 Cocksfoot grass: their hint of purple strong against the light in a sunny meadow

Weeks of cold, raw, early rain, then droughty weeks of a misplaced summer; weeks of showery rain again, some of it teasingly warm: such are the mood swings of climate now.

Wild grasses have loved it for the timeless time being, thrusting up into flowers, panicles, awns, the pollens of July dusting over the hilly distances and dulling the greens to beige.

One grass that gets no chance to flower is the Lolium perenne of Ireland’s farming fields. Perennial ryegrass, the cud for cattle, is chopped off and furled into silage before it can spend its energy on sex. Its ratty little pigtail of a flower spike is no loss to art.

The flowers in my drawing are cocksfoot, their hint of purple stronger against the light in a sunny meadow. In the days when there was time enough to consider such things, its chunky spikelets could rhyme, in the mind’s eye, with the stubby feet of fowl.

In the days when Patrick Kavanagh could write of “the wet leaves of cocksfoot that polish a farmer’s boots”, it was still a grass for seeding hay meadows in Monaghan, its tall, dense tussocks growing up to a metre high in masses of leafy herbage.

In the years before “the ryegrass revolution”, circa the 1960s, grasses such as cocksfoot and timothy could, indeed, handsomely outperform Lolium. In his magisterial book The Grasses of Ireland (2012), John Feehan promised that cocksfoot “can produce immense crops on good, damp soils, and is able to withstand prolonged droughts because it roots deeply”.

He goes on: “It had been known to yield the astonishing weight of 73 tonnes per acre at three consecutive cuttings, combined in one season.” But its big, boot-polishing tussocks eventually went against it, along with the greater spring of ryegrass under hooves, its greater digestibility and a tolerance of repeated cropping.

Feehan’s book, co-authored with Dr Helen Sheridan and adorned by fine photography and lovely old botanical illustrations, was published by Teagasc and University College Dublin and merited a swift reprint “for Christmas”. Teagasc still has a few, at €30 plus €9 postage. (I saw a first edition on Ebay at $173.)

Not everyone may need to know so much about Ireland’s 130-odd kinds of grasses. I had not noticed, for example, that when the flowers of purple moorgrass open early in the morning, “it is as though a little light comes on inside each”, or thought to chew a stem of sweet vernal grass for its “lavender-like flavour”.

It was news, too, that cocksfoot supports no fewer than 139 invertebrate lives, among them some 50 kinds of moths, large and small, and more than a dozen butterflies.

Grasses in flower don’t need strong colours to attract pollinators: their seeds are broadcast by the wind. But the lockdown with garden or wayside at hand may well have brought a more sensitive eye to their feathery, plumed, strokable, arching, architectural, wind-chime forms.

This will prompt the usual power-hungry need for a name, some of them instantly comfortable: meadow foxtail, crested dog’s tail, giant fescue, Yorkshire fog. For such honest appetites, the National Biodiversity Data Centre has published a “field-friendly” 164-page guide to identifying some 100 Irish species. It is available online for €15 at biodiversityireland.ie.

This summer, too, the Irish members of the Botanical Society of Britain and Ireland (BSBI) have launched an “Irish grasslands project”, backed by the National Parks & Wildlife Service and the CEDAR centre in Northern Ireland.

Semi-natural grasslands are those cleared of Ireland’s original woods but never ploughed, reseeded or annually “improved” with chemicals. A national survey took six years to map their habitats for conservation potential.

A third of the top-quality sites were in the drumlin country of Co Leitrim – this despite the great swathes of conifer forestry. Another prime site was the bankside meadows, never ploughed but often flooded, of the Shannon callows.

Between the two areas, in a pilot development funded by the European Union, 31 small farmers entered many parcels of land in a project weightily named RBAPS, or Developing Results Based Payment Schemes.

Monitored through 2016 and 2017, they were rewarded for effort in conserving plant species, the rare marsh fritillary butterfly, waders and other ground-nesting birds. The payments were awarded “on the condition of the biodiversity maintained, rather than carrying out specific management actions”.

The trial was judged a success, not least in showing how tiered payments “incentivise higher quality results”.