Over the next few decades, nine commercial forests will be converted to purely recreational areas 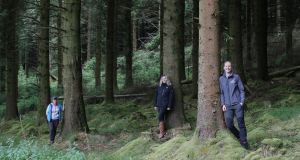 The Dublin Mountains are a sanctuary of sorts for the ever-expanding suburban and urban populations which lie beneath them.

Everyone has their favourite spot to retreat to for quietness, fresh air and outdoor exercise with family and friends. With 550 visitors a day, Ticknock woods – right in the centre of this green east-west band of upland forestry – is Coillte’s most popular forest in Ireland.

For years, there have been calls to improve the biodiversity and amenity access of these public-owned forests on the doorstep of our capital city.

Now, in 2020, Coillte Nature – the new not-for-profit branch of the State-owned commercial forestry business – has responded by setting out a more people- and nature-friendly plan for the future.

The so-called Dublin Mountains Makeover is, in some ways, the culmination of this partnership approach coupled with Coillte’s own desire to manage up to 20 per cent of its forests principally for biodiversity and recreation. Over the next few decades, it will see nine forests in the Dublin Mountains converted from commercial forestry to purely recreational areas. It will be the largest forest transformation project of its kind ever carried out in Ireland.

The approach to planting trees in these forests – 90 per cent of which currently have non-native coniferous trees – will change. Sections with suitable soils will be planted with native trees, and trees will no longer be clear-felled. Instead, continuous cover forestry techniques will be used.

This approach sees the removal of small numbers of trees over time, allowing a mix of species and ages of trees to co-exist at the same time.

“Continuous cover forestry allows the light to reach the forest floor and new seedlings to grow. This leads to a multigenerational forest with greater species diversity into the future,” explains Karen Woods, Coillte forester and operations manager for Coillte Nature.

“These forests were originally planted for timber production. Before the forests, there was some heath and sheep grazing on the Dublin Mountains. The city was far away. Now, it’s much closer,” explains Woods, who wrote the plans for the Dublin Mountains Makeover.

“There will be some clear-felling but this will be the last clear-felling. From then onwards, these forests will be managed under continuous cover forestry,” explains Woods. “The end result will be much more diverse woodlands, more autumn colour in the landscape and healthier forests, more resilient to climate change,” she adds.

On a recent visit to Ticknock Woods and Carrickgollogan, Woods shows The Irish Times areas in the forest that will change under the new approaches. Next to where we stand and chat – with a view of Three Rock mountain – are trees with clearly marked red lines destined for the chop to allow natural regeneration. But, close by, we can also see the new natural growth of firs and spruce in areas that have been clear felled. We walk a bit higher and have a view right across Dublin to the Cooley and Mourne Mountains beyond. On clear days, you can see as far as Wales.

After our walk in Ticknock Woods, we travel east to Carrickgollogan. On the summit, we look across an area that was badly burned in 2018. It will be cleared and replanted with native trees. Here, we have a magnificent 360 degree view back to the Dublin and Wicklow mountains and right out across Dublin Bay.

“To the average person, it will look a lot like normal forest management with machinery ... and we’ll have to close some of the trails temporarily but it will be short-term pain for long-term gain,” explains Woods. Ongoing works will be signposted so visitors can understand which areas are being maintained through continuous cover forestry or “remove and replant” approaches. Some areas will be replanted with a mix of birch, rowan and Sitka spruce, depending on elevation and soil types.

New native trees will need to be fenced off and the public will need to be patient to enjoy the new growth while saplings are protected from the deer that live in these woods. “But, we will have some trails to walk through and teach people about the native tree species which will take a long time to mature. Over time, you will see different textures, movements of leaves and a mosaic of different habitats,” explains Woods.

Hannah Hamilton, communications and partnership manager with Coillte Nature adds, “The Dublin Mountains Makeover will create new biodiverse habitats within the landscape of the mountains while improving the resilience of the forest by having trees of all different ages growing alongside each other.”

Red squirrels make their home in these coniferous forests unthreatened by the non-native grey squirrels who prefer deciduous woodlands. The tree-less shrubby areas around Fairycastle and Tibradden mountain are also important breeding habitats for birds including the endangered red grouse.

Hamilton acknowledges that publicity around the project has led to calls for other Coillte forests to be similarly converted. “The Dublin Mountains Makeover is a unique project close to the biggest urban centre and most popular forests in Ireland. There has been a huge call for this to happen and it made sense to do it,” she answers diplomatically.

Meanwhile the Dublin Mountain Partnership is keen for people to continue to enjoy this amazing resource on the edge of our capital city.

The partnership manages the Dublin Mountains Way, a 42km signposted trail that runs from the Sean Walsh park in Tallaght to Shankill village. Volunteer rangers lead walks and patrol areas of the mountains at the weekend. The way-marked trail starts in Sean Walsh Park, five minutes walk from the Tallaght Luas stop and ends in Shankill village, about 10 minutes walk from the Shankill Dart station. Dublin Bus also has routes that link to various points on or near the trail.

“We are constantly improving our trails. In 2021, we have plans to expand our walking, equestrian and mountain bike trails. It’s all about creating a friendly shared space that everyone can enjoy,” says Duffy.