Sea lions give birth when food is plentiful, giving them a greater chance of survival 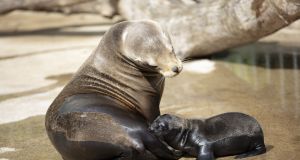 Their arrival has been a bit like buses . . . none for some time, then two or three together.

Three California sea lion pubs have been born within two weeks at Dublin Zoo. This is the first time there have been so many sea lion births together, from different mothers, over such a short timeframe at the zoo.

And they are the first California sea lion pubs to be born at the zoo for six years.

The latest additions, which include one male and two females, are the offspring of father Niko and proud mothers Florence, Seanna and Cassie.

“Generally speaking, sea lion pups tend to spend their first few days on land bonding with their mums before swimming lessons commence. While each mum is teaching her pup, she will swim beneath it to keep it afloat and guide it through the water,” said Eddie O’Brien, who looks after sea lions, reptiles and birds at the zoo.

It is not a coincidence that the three new arrivals were born in June. Sea lions give birth at optimum times of the year, when conditions are at their best and food is plentiful, giving them a greater chance of survival.

They have not yet been named.