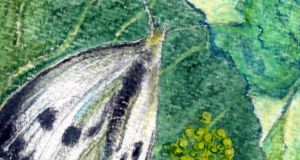 The butterfly, a cabbage white,
(His honest idiocy of flight)
Will never now, it is too late,
Master the art of flying straight . . .
– Robert Graves, Flying Crooked

After the spring’s interminable wait for insects on the wing, a score of white butterflies were suddenly winnowing the air and flinging themselves around the garden like a drunken corps de ballet.

Just where they’d been hanging out for the winter I have little idea, or exactly what promise of warmth impelled them to unzip their pupal sleeping bags. But, drawn to a sprawl of pink-flowered cranesbill geranium, large and small cabbage whites (two allied species) were dodging round the bumblebees for a quick fix of nectar, then twirling into the air to join the mating game.

The males have scent-producing organs on their wings that dispatch aphrodisiac pheromones to the females’ antennae. Of 100 and more compounds, key molecules include hexahydrofarnesyl acetone, in case you want to buy online.

If that is too much to know, consider the industry of Dr John Feltwell, prolific English naturalist and author. His massive digest of research on the big cabbage white, Pieris brassicae, drew on some 4,000 studies in 1982 and still sells as an ebook for €94. (I’ll do without.)

“This insect,” an online chunk of its preface tells us, “is now a demonstration object in the sixth-form schoolroom, an experimental ‘rabbit’ in the university laboratory, a test animal in virus and bacterial research projects; a tool for the study of flight mechanisms, migration, plant biochemistry, hormones, genetics, allergies, pigments, mimicry, etc, etc.”

Among newer et ceteras is solar photovoltaics – turning the sun’s energy into electricity. But the use of mirrored sidewalls and lenses to focus the light on to photovoltaic material has needed very bulky systems with heavy and costly reflectors.

Cabbage white butterflies are quick to fly even on cloudy days, suggesting that their V-shaped posture when basking warms them up through the reflection of light and heat on to their bodies. A closer look at their wing scales finds them gleaming with microscopic beads.

Researchers at the University of Exeter studied them to test the potential of copying the wing structures in solar photovoltaic concentrators. Attaching real scales as reflectors to a solar cell increased output power by 42 per cent.

A lightweight layer of similar nanobeads could, it’s proposed, do the same in the V-trough of solar panels. The research confirmed “that butterflies have evolved to concentrate light effectively for their needs and supports the idea that any given problem may first have been solved by nature.”

So much for biomimicry, fount of inspiration for new technology. The strange and elaborate process of butterfly metamorphosis, from caterpillar into pupa and thence into flying imago, has, however, agitated the deniers of Darwinian evolution.

The change from caterpillar to butterfly – and from larvae to winged adult in a host of other insects, such as bees and dragonflies – seems to creationists far too profound and complex to have evolved by gradual means, even over the millions of years whose function they also deny.

An elderly British biologist, Donald Williamson, raised a storm of scientific ridicule a decade ago by claiming that, rather than arising from a common ancestor, caterpillar and butterfly resulted from two different species accidentally mating with each other.

Nothing, indeed, could seem more foreign to each other than the pristine delicacy of a cabbage white butterfly, supping nectar from the flowers of one kind of brassica (say the lovely, clove-scented dame’s violet that self-seeds here and there on our acre) and the massing of voracious caterpillars on human food crops.

In the long, coevolutionary liaison between insects and their special food plants, the volatile chemicals exuded from the brassica plant family, notably the mustard-oil glucosides, prompt the large white butterflies to lay a bright mosaic of yellow eggs on the undersides of the leaves.

They can even distinguish between plants that have been fertilised and are stronger and greener, laying more eggs on those in good condition and promoting faster growth of their caterpillars.

Both large and small whites have two broods a year. Many first eggs are already laid, their offspring hatched and eating and producing new adults by July. It’s after that when, augmented by clouds of white migrants from Europe, the green-and-gold caterpillars proliferate to shred cabbages and sprouts and scatter them with the sulphurous and stinking blobs of “frass”.

My few brassicas – cabbages and calabrese – lurk in the cooler reaches of the polytunnel, shaded by its windbreak of trees. Whites find the doors wide on sunny days and flutter in beneath the canopy. I could swat them with my sunhat but prefer to leave a thumb ready for swiping off the undersides of leaves.