In praise of aphid-eating pollinators

Stingless, most no bigger than a thumbnail, hoverflies are a largely unsung legion among our insect pollinators 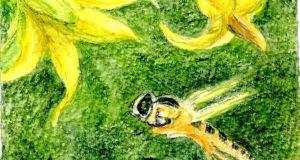 A hoverfly at tomato flowers: drawing by Michael Viney

For me, summer will be confirmed when I am stopped in my tracks by a glint in the air a step or two ahead of me: a spark of pure sunlight with just a hint of colour, a tiny whirr of wings that makes a space shift sideways, or up or down in a sudden, quantum bilocation.

The insect is showing off, staking out a territory and hoping for a mate, and if I can track it to a flower, the hint of colour will no doubt resolve into the imitative, wasp-bright, yellow and black markings of so many of Ireland’s hoverflies.

Stingless, most no bigger than a thumbnail, hoverflies are a largely unsung legion among our insect pollinators. Evolution has woven them into the diversity of wildflowers, and the past 5,000 years have recruited their Irish range of species, some 180 strong.

While the pollinating services of bumblebees and honeybees deserve their headlines, gardeners value hoverflies for another great benefit. Their larvae, hatched on plants, eat sap-sucking aphid pests rapaciously: they are “aphidophagous”.

Outstanding in this respect is the common and much-studied Episyrphus balteatus, whose glowing orange body bands make it “the marmalade fly”. Laying perhaps 4,500 eggs in its lifetime in the heart of aphid colonies, it is the aphids’ most effective natural enemy, to be welcomed into cereal crops and tomato and strawberry tunnels. Welcomed, that is, by growers who prefer aphid control by hoverflies than the toxic protection of pesticides.

Last year, as the termination of neonicotinoids was finally played out in Europe, shocking news of major insect decline was reported in Germany. A 27-year record of insect biomass in 63 nature protection areas showed a midsummer decline in flying insects of 82 per cent – a drop inexplicable in terms of habitat or weather.

This is part of the wider decline in flying insects that leaves our car windscreens and headlights unnaturally clean at journey’s end. It threatens to worsen as climate change disrupts the insects’ habitats and range. But more immediate threats are posed by the intensive farmland they fly across on long-distance migration.

The marmalade fly, for example, while native to Ireland for thousands of years, is also a determined migrant. Like some of our butterflies, it travels in huge numbers from the Mediterranean, arriving in July and August and spreading across the island.

The first scientific record of this came in 1995, when two biologists in a boat off Courtmacsherry Bay in Co Cork saw skeins of hoverflies heading for the coast in company with clouds of red admirals. The flies were so numerous that dead ones were forming drift lines on the sea.

Such mass arrivals have sometimes caused public panic, as on coasts of southeast England during a heatwave in 2004. Mistaking the hoverflies for wasps as the insects settled on them for a rest, children ran screaming, prams were covered up, and so on.

As for their return to the south, a memorable observation came from a British ornithologist, David Lack. Climbing to a high, narrow pass in the Pyrenees to check the passage of migrating birds, he found a torrent of hoverflies, chiefly Episyrphus balteatus, pressing on at ankle height into the wind. What caught his eye was “a shimmer of iridescent light, due to the reflection of the autumn sun on myriad tiny wings”.

Given the dire decline reported from Germany, I have to wonder how far hoverfly migrations through Europe to Britain and Ireland have already been hit by neonicotinoids. The marmalade is among the hoverflies attracted especially to the nectar of yellow flowers, like the sulphurous shades of fields of oilseed rape, prime candidate for systemic pesticides.

Such threats crop up in the scientific bible of Europe’s hoverflies, Syrph-the-net, the remarkable database compiled and maintained by Dr Martin Speight, long the leading entomologist of the National Parks and Wildlife Service and now with Trinity College Dublin’s zoology department.

For example, accompanying the marmalade fly among the “anthropophilic” (human-friendly) species is another migrant, Eristalis arbustorum (no English name), common in urban parks and gardens. But its appetite for the nectar of hedgerow plants takes it on to farmland, where its larvae mature in cow dung.

Like other insects involved in recycling manure, its progressive decline has been blamed on dosing cattle with systemic chemicals, such as ivermectin, to kill parasitic worms.

There are few common names among hoverflies and a great variety in size, shape and colouring: several dark ones look more like bees. There is much more about them at the Irish Pollinator Initiative hosted on the website of the National Biodiversity Data Centre (biodiversityireland.ie).

This also offers species photographs, gives access to their accounts in Syrph-the-Net and welcomes new records of local hoverfly species. These may begin with that memorable pause, a few mesmerising moments, watching a hovering hoverfly doing its quantum thing.