Smokers cause ‘more than half of Irish litter’

Discarded cigarette butts make up more than 56% of litter on the streets, says report 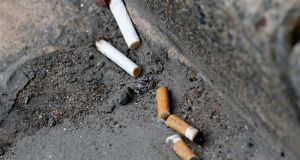 Cigarette butts: make up for more than 56 per cent of Irish litter. Photograph: Regis Duvignau/Reuters

Cigarette butts accounted for more than half of Ireland’s litter problem, according to the Department of the Environment.

Passing pedestrians were the greatest culprits of a problem that has become more common over the last year, according to a National Litter Pollution Report. Smokers, and their cigarette butts, were responsible for more than 56 per cent of rubbish discarded on the streets.

The report, by the Department of the Environment’s litter monitoring body, looks at the extent, causes and composition of litter across the State. Passing pedestrians were found to be the main causes of litter, accounting for 42 per cent, substantially ahead of passing motorists, who were the second largest cause, accounting for 19 per cent in 2017.

Retail outlets, places of leisure or entertainment, fast-food outlets and schools and schoolchildren were other factors identified.

Overall, however, the Republic appears to be getting slightly better at disposing of its rubbish, with almost 16 per cent of the areas the litter monitoring body surveyed were completely litter free – the second-highest level on record.

The 2017 National Litter Pollution Report also found just under 64 per cent of areas surveyed were only slightly littered, a finding described as encouraging by Minister for the Environment Denis Naughten.

The numbers for 2017, suggesting 15.6 per cent of areas surveyed were completely litter-free, were only bettered by the 2015 report, putting the figures at 16.4 per cent.

“I would like to commend the local authorities, who work closely with the communities they serve, and are continuing to make progress in the ongoing battle against litter pollution across the country,” Mr Naughten said.

“Each of us has personal responsibility and a role to play in keeping the towns, villages and cities we live in litter-free. Smokers in particular can bring about a significant improvement in the litter situation through relatively minor behavioural changes.

“Everyone must accept that, ultimately, it is their own actions that will ensure whether or not we live in a litter-free environment.”

He said that while he was “pleased with some of the results”, there was a need to “focus our efforts to maintain the improving standards being achieved across the country. A combination of awareness, education and enforcement is required in order to successfully combat our litter challenges.”