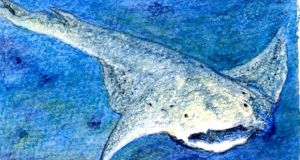 The angel shark has faced quite different threats to leave it ‘critically endangered’. Drawing: Michael Viney

There are many strange-shaped sharks in the world, but a big fish native to big sandy bays on Ireland’s west coast is among the least shark-like of all.

Squatina squatina, the angel shark, may not, however, survive to breed there any more. Once common in Tralee Bay, it was seen there earlier this year for the first time in many years, and a population in Clew Bay seems irrevocably lost.

By an early quirk of evolution, these sharks became flattened into shapes like huge skates (up to 2.5m long for a fully grown female). But while still shark-like in biology and predatory habit, their hunting ground is the sandy seabed of shallow bays rather than deeper waters of the ocean.

They glide along in shark-fashion, propelled by a muscular tail, but also with a ripple of body fins greatly expanded into wings – hence their fanciful name. This helps the hunt for crabs and molluscs. But they also lie still, camouflaged in the sand, leaping up for flatfish with jaws of needle-like teeth.

In this they share a tactic with the far smaller angler fish (though without the latter’s dangling lure). The angler is sold as “monkfish” which, just for confusion, has been an alternative name for the angel shark, with its somewhat cowl-shaped head.

Angler tails are now a best-seller commercially, and angel sharks, though coarser in texture, have also been overfished. In the northern Adriatic, notably, this led to collapse in the 1960s and their “economic extinction” as a human prey species.

In its natural range around Europe’s Atlantic coasts from Ireland and Britain to the Canaries, the shark has faced quite different threats to leave it “critically endangered”.

From important breeding grounds in Tralee Bay and Clew Bay, it has migrated to the Celtic Sea shelf and the Bay of Biscay, and some overwinter in St George’s Channel at the south of the Irish Sea. In all these waters it has suffered as a bycatch, scooped up by bottom trawling or caught in miles of tangle nets set on the seabed to catch monkfish.

One key to its Irish decline has been its low reproduction and 10-month gestation before giving birth to live pups, from seven to 25. This gives extra significance to the toll of the sharks by sea anglers in Tralee Bay in the 1960s and 1970s.

They have received a case study by Padraic Fogarty, ecologist and lead campaigner of the Irish Wildlife Trust, in a new proposal for protection of marine species (Protecting Our Ocean’s Wealth available at iwt.ie).

“Huge numbers” of the angel shark, he writes, were hauled ashore for measuring and weighing in the years before catch-and-release reformed sea-angling culture and the shark was dropped from competition for “specimen” fish.

Even caught and released, however, research now suggests that about a quarter of female sharks and rays abort their young in the stress of capture, leading to “lost generations”, some expelled on the floors of anglers’ boats. How far this hits populations, given natural mortality of the young, is unproven (seedoi.org/10.1016/j.biocon.2017.10.010).

In a tagging programme carried out since the 1980s by anglers with Inland Fisheries Ireland, the angel shark has declined by more than 95 per cent. Even in its core area of Tralee Bay, few have been encountered in the last 15 years.

A Red List of some 70 species of Ireland’s sharks and rays was published in 2016 by the National Parks and Wildlife Service. It listed persisting threats to the angel shark from trawling in St George’s Channel and static tangle nets set for crustaceans in Tralee Bay. The big fish joined the bay’s white skate and several other Irish elasmobranch species in the “critically endangered” category (download at npws.ie/publications/red-lists).

Officially banned for catching crawfish, the Tralee tangle nets can still be used for spider crabs, so, as Fogarty writes, “nothing has changed”. He pleads for designation of the bay as a marine protected area.

Tralee Bay is one of many such “protected areas” around our coasts under EU nature directives. But protection extends to the rich seabed and intertidal habitats and the birds that depend on them – not the fish that swim, feed and breed in its waters.

Tralee is among the 192 “marine”conservation areas listed by the Department of Agriculture, Food and the Marine. But only a handful of these, so far, have fishery management plans, regulating activities such as scallop dredging, tangle-netting or pair-trawling within protected waters.

Recent inclusion of the angel shark in the Bonn Convention, which protects migratory fish, may lessen the toll on the species away from Irish coastal waters. However, as Fogarty sees it, even in Irish bays nominally conserved under EU nature directives, “no species of marine fish or invertebrate enjoys legally protected status”.