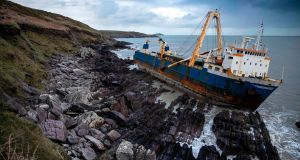 The MV Alta, a 77m Tanzanian registered cargo ship which had been abandoned and drifting in the Atlantic Ocean for 17 months, washed up on rocks near Ballycotton in east Cork last weekend. Photograph: Cathal Noonan/AFP via Getty

Oil and other waste materials are due to be airlifted from the wreck of the MV Alta in Cork next week.

Cork County Council’s oil spill assessment team met on Friday afternoon to discuss the next stage of the process in which environmental safety is being prioritised.

Efforts are now underway to secure the waste materials which are stored in barrels and which are scheduled to be lifted from the ship’s deck by helicopter on Tuesday.

“Cork County Council’s marine contractor is progressing well with preparations for the removal of the oil and other materials identified which could pose a pollution risk in the event of their spillage,” the local authority said in an update on Friday.

The MV Alta, a 77m Tanzanian registered cargo ship which had been abandoned and drifting in the Atlantic Ocean for 17 months, washed up on rocks near Ballycotton in east Cork last weekend.

While environmental concerns have been raised, the council has previously said there are no visible indications of pollution along the coast, some of which is designated a special protection area.

“This work will continue throughout the weekend in order to ensure all these materials are ready for their safe removal by helicopter on Tuesday, should weather conditions be suitable,” it said on Friday.

However, despite efforts being made by the council, Coastwatch, the international environmental organisation, has said not enough information is being given to the public.

Co-ordinator Karin Dubsky said more detail should be forthcoming on the decision making progress. Particularly, she said, to what extent cost and environmental concerns were informing decisions.

She said of particular concern was the need for an ecologist to examine local sea life for signs of pollutants.

“It’s a simple thing. Maybe they have done all of this but there isn’t enough information available, and if they haven’t done it, why not?”

Ms Dubsky said despite local restrictions, efforts would be made by environmentalists to examine limpets, a marine mollusc, on rocks in the area to see if they are falling off.

“That would worry you because you actually have a visible impact [of potential pollution]. I am hoping that that would not be the case,” she said.

Members of the public have again been urged to stay away from the wreck which is on a dangerous and inaccessible stretch of coastline and in an unstable condition.

As part of the operation, access to a local cul-de-sac road has been restricted to residents. The council has also said that lands along the shoreline are private.

Under law, it is an offence for anyone to interfere with a wreck or to attempt to board it.

A Revenue official has been appointed Receiver of Wrecks by the Department of Transport, a function necessary to manage the possession and disposal of vessels which wash ashore.