Water levels at Athlone have risen by 60mm on Thursday and more rain is forecast over the coming days but locals there feel their voices aren't being heard. Video: Enda O'Dowd 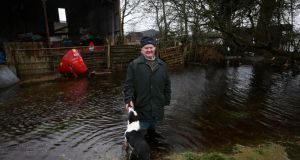 Jim Connolly with his dog Judy in his flooded back garden on his farm in Newtownflood, outside Athlone, Co Westmeath. Photograph: Laura Hutton/The Irish Times

Eighty-five-year-old Jim Connolly’s small cottage in Newtownflood, near Athlone in Co Westmeath, has flooded twice in the last decade. Heavy rainfall is now putting it at risk again, and there’s nothing he can do but watch it happen.

“The water came into my house twice already – in 2009 and 2015. It’s insured all right, but I get nothing for flooding. I went down to my sister in town for two months the last time. It was a long auld time,” Connolly says.

“And now I’m watching it coming and coming and coming. It was up a few more inches last night, and there’s nothing I can do to stop it. This is a whole day’s rain and we don’t know where it’s going to stop. It’s frightening, and it’s not helping me anyway. I had bags all around the door the last time and it still came in.”

Connolly has been a farmer his whole life, since “before God was a boy”. His house is right beside his farmland, which has been under water since August last.

Today, he is frustrated by the lack of help, and his sense that rural people are being abandoned. “They can send people to the moon but they can’t do anything about the flooding,” he adds.

He is one of many Midlands people experiencing flooding. Many more will face troubles in coming days, if forecasted rains arrive.

The Office of Public Works (OPW) has a flood plan in place. Defences have been erected to protect homes and businesses. More rural areas, however, are harder to protect. Many fields are long under water. Farmers feel ignored.

For Pádraig Cunniffe, a beef farmer who lives no more than five minutes away from Connolly, flooding is just another hardship. “If they got that flooding in Dublin now, it would be in every paper and every front page,” he says.

“But we have it here today and nobody cares. We’ve been left, just left here and nothing’s happening,” says Connolly. Floods in the Midlands are not rare, but they are getting worse.

Westmeath is not the only county being affected. Andrew McHugh, a dairy farmer in Brianstown, Cloondara, Co Longford, keeps his cattle on higher ground, but much of the land around him is under water.

Thousands of acres of land and people’s houses and sheds are flooded when the Shannon’s waters rise. “For the people whose homes are flooded, it’s an absolute nightmare,” McHugh says.

They can’t even save a small town or a village, and politicians are saying they’re going to save the world?

“From a farming point of view, it’s generally summer flooding that’s the problem. There’s no doubt that there’s not enough being done,” he says. Locals, he goes on, “are sick of it”.

In Carrickobrien, near the Roscommon-Westmeath border, horse-trainer Tom Cleary reluctantly accepts that flooding is now part of life. “It would want to rise another foot before it’s on my gallops, but it’s rising very quickly,” he says.

Cleary is critical of political promises. “They can’t even save a small town or a village, and politicians are saying they’re going to save the world? Let them start at home and try to do something useful here first.”

Locals believe that a lack of maintenance on the River Shannon and high water levels needed for tourism boating are to blame, not just changing weather patterns brought on by climate change.

However, Breandán Anraoi MacGabhann, lecturer in Geography in the University of Limerick, says the issue is a lot more complicated, dating back to changes in the use of land over hundreds of years.

A national land management plan to protect homes, land and people must happen, including the “rewetting” of boglands and more forestry, says MacGabhann.

“How agriculture has developed in the country particularly, the loss of forestry, that sort of thing. We have had so many of our wetland areas being dried out, and used as a source of fuel in more recent times,” he says.

However, it also means planning change. “People have been building houses on flood plains. That’s not necessarily the fault of the people who wanted to build the houses.

“Unless they’re experts in hydrology, they may not have necessarily known it was a flood plain,” says MacGabhann. “But at the end of the day, that sort of thing has been allowed.

“It has gone through the planning process. We’ve let it slip through the cracks but we need to stop and make sure that this stops happening. We need more of a national land management plan to look at where people can build.”