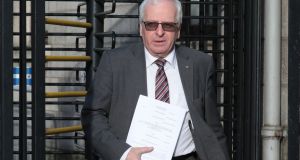 Independent TD Mattie McGrath: “Many young adults and children with disabilities are totally sidelined and marginalised”

Taoiseach Micheál Martin has said exemptions from Level 5 restrictions cannot be created for every sector that wants one as he warned of tough days ahead.

Speaking ahead of the midnight start of the State’s second lockdown in the Covid-19 pandemic, Mr Martin said “this will be a difficult and tough six weeks”.

He told the Dáil that many sectors have said they can operate safely, but he said Government departments held an oversight meeting on Wednesday morning. The discussion aimed “to make it clear to many departments that we want Level 5 to work, and the capacity to create exemptions in different sectors does not exist generally”.

People were looking for different exemptions in different areas, he told TDs as calls were made for marts and the retail sector to be allowed to operate amid warnings that with a move online business would go overseas to foreign businesses.

Mr Martin said they had been advised by Nphet and “I accept the advice fully in terms of moving to Level 5 for six weeks”.

The Taoiseach added: “It will be tough and difficult, but the end object is the key objective to get our numbers and incidence rate down so we can reopen again.”

Independent TDs Michael Fitzmaurice and Michael McNamara appealed for marts to be allowed to remain open as they had successfully achieved social distancing with no more than 25 in attendance, and “weanling calves are coming on market in large numbers”.

Mr Fitzmaurice said marts were also running online, but currently approximately 20 marts were experiencing trouble with their broadband connections and it would be at least a month before this was resolved.

Mr McNamara said farmers would want to go and inspect the cattle they were buying and “in so doing there will be more contacts between people than there would be if marts were allowed to continue to operate”, as they do under current restrictions.

And he said “this whole move to online is not the panacea it is being presented as”.

“Even clothes shops with an online presence, such as Patrick Bourke Menswear in Ennis, are distraught at what is happening because once people go online it drives business out of the country to Amazon and foreign firms.”

Sinn Féin TD Claire Kerrane acknowledged that they could not have concessions for everything “in the context of these new restrictions, but we are talking about farmers’ livelihoods”.

She said that marts had gone above and beyond to make sure that social distancing was in place.

The Taoiseach, however, insisted that exceptions could not be made for all the sectors claiming they could operate safely, and they had agreed to follow Nphet recommendations which did not allow for exceptions in general.

Independent TD Mattie McGrath expressed concern that like the previous lockdown people with disabilities, special needs children and adults would be left behind. He cited the case of a mother who has been waiting months for a place for her adult child.

“Many young adults and children with disabilities are totally sidelined and marginalised,” he said.

Mr Martin said funding had been made available to ensure the restoration of services for adults with disabilities.

“We will continue to do what we can within the constraints of the transmission of the virus to provide services for those whose difficulties the Deputy has raised.”

4 Family of Irish man held in China: ‘Nobody is helping us – we are just begging for help’