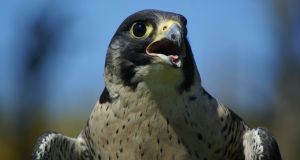 The peregrine falcon: Just over 300 bird of prey were found to have been poisoned or suffered some form of unnatural death between 2007 and 2019

The vast majority of Ireland’s birds of prey killed by human attacks or other activity were poisoned, according to a detailed new report spanning more than a decade.

Just over 300 were found to have been poisoned or suffered some form of unnatural death between 2007 and 2019.

New details have been collated by the Raptor Protocol (Recording and Addressing Persecution and Threats to Our Raptors), a collaborative approach between the National Parks & Wildlife Service (NPWS), the Veterinary Laboratory Service and State Laboratory, published on Wednesday.

It was developed in 2011 on the back of an EU pilot set up in response to a lack of formal investigation protocols in Ireland for death and injury to birds of prey.

Although established in 2011, the Protocol includes incidents between 2007 and 2019, when a total of 338 incidents were confirmed and recorded on its database.

Some individually recorded incidents included multiple causes of physical harm, and some included a number of birds.

Of a total of 338 incidents, however, 294 involved birds of prey, affecting 301 individual birds. Poisoning incidents accounted for 71.5 per cent of cases, shootings for 28 per cent and trapping or mutilation for 0.5 per cent.

“All regularly breeding native Irish raptor species were confirmed to have suffered some form of poisoning, persecution or other direct anthropogenic non-habitat related cause of injury or mortality,” the report found.

However, despite an average of 26 separate incidents a year, investigators believe the actual number of birds affected to be far greater.

“It is clear … that human, non-habitat related threats to Irish raptors are widespread, with incidents recorded in every county of Ireland,” the report notes.

“There are notable blackspots for such incidents throughout the country, and particular risk periods, namely springtime for illegal/misuse of poison incidents and late summer/autumn and winter for shooting incidents.”

Most deaths occurred in the east of the country with Wicklow recording by far the greatest level at 57.

“Continuing to record confirmed and possible events in a systematic fashion will build on the database and provide stronger background information to target illegal activity through enforcement and education.”

Commenting on the issue, Minister of State Malcolm Noonan noted in particular the poisoning of 23 Buzzards in West Cork in early 2020 which he said had been “an eye opener for many”.

“But this comprehensive report shows that poisoning and persecution incidents are happening annually,” he said. “The intelligence gathered by those coordinating Raptor will serve very usefully to inform approaches to tackling these incidents.”