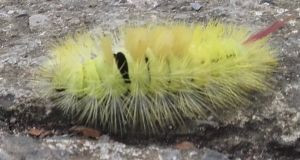 Caterpillar of the pale tussock moth seen in Co Meath.

This large, friendly fellow flew on to our patio near Tuosist on the Beara Peninsula, Co Kerry in August. Is it a musk beetle and are they rare? – Vincent Sheridan, Drumcondra, Dublin 9

It is a musk beetle, which can also be green rather than the coppery colour of yours. There has only been one report of it in Ireland and that was also on the Beara Peninsula in the Glengarriff Gardens.

We found this little guy washed up on the shore at the cove in Greystones. We swim every morning and have never encountered one before. – Orlaith Bourne, Greystones, Co Wicklow

I spotted this octopus washed up on Sandymount Strand. Is it Octopus vulgaris? It was about 10 inches in diameter. – Ian Brunswick, Sandymount, Dublin 4

Could you identify this extraordinary caterpillar? My children were amazed by its bright colours, fluffy patches and purple tail. – Aisling O’Toole, Dunshaughlin, Co Meath

It’s the caterpillar of the pale tussock moth.

I spotted this moth sheltering during a sunny day in my garden. It appears to have little appendages jutting out over the closed wings. – Helen Birtwistle, Cork

There are three Y moths: the beautiful golden Y, the plain golden Y, and the silver Y moth. Yours looks like the silver Y, which can be variably brown.

We found these embedded in our dog Pip’s skin after hiking in the Mourne Mountains. They were about 5mm in length. – Vanessa Drew, Ballyroney, Co Down

It’s a sheep tick, sucking blood from your dog; it can also carry disease. You can remove it carefully with a tweezers.