Move by some outlets follows ‘shop and drop’ over weekend, says campaign co-ordinator 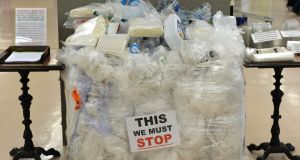 A display of plastic at Nolan’s supermarket in Clontarf. Photograph: Alan Betson

Some supermarkets, including outlets that are part of major supermarket groups, have committed to keeping bins at checkouts permanently so shoppers can discard plastic packaging immediately after making purchases.

This follows Saturday’s “shop and drop” day of action organised by environmental groups, which was supported by thousands of shoppers and facilitated by many outlets.

There were anecdotal indications from supermarkets that they wish to facilitate the initiative on a permanent basis, said Mindy O’Brien, co-ordinator of Voice, who organised the day with Friends of the Earth (FoE) Ireland.

They were now establishing the exact level of support from both shoppers and outlets, she said. On the latter, some were confirming that bins would be at checkouts, others were considering putting bins at a “separate decanting areas” because of possible delays for other customers at checkouts, while others were highlighting their existing packaging commitments with Repak recycling company.

It was always going to be challenging organising “a huge national day-long national initiative” and some outlets were a little uncertain about what was involved but were fully supportive by the end of the day, she said.

In her opinion, SuperValu “tried to get ahead of the message” and was also underlining its commitments to using decomposable biobags and considering the introduction of plastic-free aisles. But this was just one step; what was most critical was prevention; reducing the use of plastic, she said.

FoE director Oisín Coghlan said: “Saturday’s ‘shop and drop’ action on supermarket packaging was a huge success. Thousands and thousands of people around the country took part and most local stores responded positively to customers’ desire to ditch their unwanted plastic.”

Many local stores put out bins on Saturday for customers to leave their unwanted plastic in, he added. “We’re calling on them to keep those bins in place now until supermarket chains have taken steps to reduce plastic packaging itself.”

“We welcome the fact that SuperValu in Sutton has decided to keep its new plastic bins in place on an ongoing basis. All supermarkets should so the same,” he said.

While keeping the plastic bins in place in-store was a positive step, ultimately it demonstrated “the absurdity of much of the packaging if the customer only needs it for the walk from the shelf to the checkout”, Mr Coghlan said. “It’s a practical step supermarkets can take to support the public appetite for this interim solution.”

The Sick of Plastic campaign would continue to urge supermarkets to take the six steps that could actually reduce the amount of plastic customers are faced with.

The FoE spokesman criticised Repak “for its complacency in the face of rising consumer frustration of the rising tide of plastic packaging”.

“It was disappointing to hear Repak say Ireland is out-performing our EU target of recycling 22 per cent of plastic packaging. Most people would think that’s far too low and it also misses a crucial point. The public are tired of being made responsible for recycling more and more supermarket packaging that we didn’t ask for,” he said.

They wanted supermarkets “to work with customers to make it easy for shoppers to choose a plastic-free option”.

Meanwhile, the Church of Ireland plans to reduce the environmental footprint of its General Synod, which takes place on May 10th, 11th and 12th at the Armagh City Hotel.

This year the Church is providing an electronic option for distribution of Synod literature to members and is working with the Armagh City Hotel to reduce the environmental footprint.

The General Synod adopted an Environmental Charter in 2015. The Church’s central trustee body, its Representative Church Body (RCB), adopted a climate change policy last year and an Environmental, Social and Governance Policy in 2016.

Information on environmental sustainability, including suggested eco-actions and a template for undertaking an energy audit, have been made available to parishes.

Meanwhile the RCB’s Property Department has also set up a pilot scheme, involving 10 parishes in Down and Dromore diocese, to review the efficiency of existing energy management controls and to make recommendations for improvements to systems in parish halls and centres.

Under the Church’s tree-planting strategy, two trees must be replanted (where practicable) for every tree that needs to be cut down on church property.