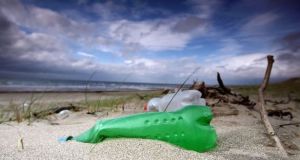 The Citizens’ Assembly has called for the ‘eradication of single use plastics particularly in supermarkets and the imposition of penalties for failure to comply’. Photograph: Getty Images

The Citizens’ Assembly has submitted a series of extra recommendations to the Government on tackling climate change, including a call for more rigorous efforts to reduce plastic use with new penalties for polluters and banning single-use plastics.

Its report on “How the State can make Ireland a leader in tackling climate change” was laid before the Houses of the Oireachtas on Wednesday by Assembly Chair Ms Justice Mary Laffoy.

The controversial recommendation that farmers be subject to carbon taxes based on emissions from agriculture is retained, but in an additional recommendation, the Assembly calls for greater support for the agriculture sector “to transition to models of production which emit lower greenhouse gases (GHG)”.

“Cognisance must be taken of the impact which the sector has on the economy, particularly the rural economy,” it adds.

On plastics, it says: “Steps should be taken to reduce packaging, particularly plastic packaging, and resulting waste. Suggestions for such steps include eradication of single use plastics particularly in supermarkets and the imposition of penalties for failure to comply and the introduction of a deposit scheme on plastic bottles.”

Included in the additional recommendations is a call for a positive public information campaign on the benefits of tackling climate change, and all new buildings “should have a zero or low carbon footprint as part of the granting of a planning permission”.

The most significant of the initial 13 recommendations include:

– Prioritise public transport investment over new road infrastructure spending at a ratio of no less than 2-to-1.

– End State subsidies for peat extraction on a phased basis over the next five years. That would bring peat-firing for electricity to an end sooner than planned by Bord Na Móna.

– Establish an independent watchdog to make sure the State sets and meets five-yearly targets for emissions reductions. This provision was removed from climate legislation passed in 2015.

– Introduce higher taxes on carbon pollution; the agriculture sector should apply the “polluter pays principle” to its emissions, and resulting revenue should be reinvested to support climate-friendly agricultural practices.

IFA president Joe Healy has said the carbon tax proposal “is a ‘no-go’” but accepted there were other recommendations that could reduce carbon in the Irish economy.

“Increasing the existing carbon charge on farming would merely continue a failed policy of more taxes without delivering any reduction in national emissions,” he added.

“Agriculture’s GHG emissions had fallen by 3.5 per cent since 1990. At the same time, national emissions are up 10.4 per cent. In the case of transport, emissions have increased by 139 per cent,” Mr Healy said.

The Stop Climate Chaos coalition called on the Government to respect the mandate of the Assembly by establishing a dedicated Oireachtas committee to take the report’s recommendations forward.

Its spokesman, Oisín Coghlan, said: “The Government must take the Citizens’ Assembly report on climate as seriously as it took its report on the Eight Amendment.”

He added: “If implemented, the recommendations would move Ireland from its current position as a laggard not a leader, as the Taoiseach told the European Parliament in January.”

Sorley McCaughey, head of Advocacy and policy at Christian Aid Ireland said Climate change was already having devastating effects on vulnerable communities around the world who have done the least to fuel the crisis.

“If the Government is truly committed to national and EU climate change obligations, as well as the [UN]Sustainable Development Goals, the Assembly recommendations must be immediately developed into constructive policies in order to drastically reduce our polluting emissions.”

Ms Justice Laffoy said: “It was implicit in the mandate in the Oireachtas Resolution, that climate change was real, happening and must be tackled. The deliberations of the Assembly therefore focussed on how the State could best meet that challenge.

“The members’ interest in the topic was clearly demonstrated when they decided they should dedicate a second weekend to it. Just over 1,200 submissions were received by the Assembly on this topic – a number quite unprecedented in an Irish context.”