College Green restrictions ‘could continue into 2019’ 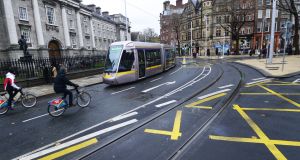 Traffic restrictions, which have seen the removal of services for thousands of Dublin bus passengers from Dublin’s College Green, are set to continue into 2019, Dublin City Council has warned.

The unexpected length of last month’s An Bord Pleanála appeal hearing on the council’s plans for a €10 million civic plaza at College Green, means a decision on the project is not expected to be issued by the board until August or September, the council’s head of traffic management Brendan O’Brien has said. The board had been due to issue its decision on Friday of this week.

The hearing on the council’s proposal to build the pedestrian and cycle plaza and ban all traffic, including buses and taxis, from accessing Dame Street through College Green opened on March 12th, and had been due to last for three days. However, it was not completed until March 29th.

Mr O’Brien said the unanticipated long duration of the hearing and the “intricacies” of the project which emerged during its sessions, made it unlikely an order would be issued by the board before the summer.

“I don’t expect a decision from An Bord Pleanála until August or September this year. Realistically that is the situation there at the moment.”

There were now 100 fewer buses an hour using College Green at peak traffic times Mr O’Brien told the council’s traffic committee, but he said, while this measure and the restriction on taxis had “considerably alleviated the pressure they have not fully addressed it”.

A spokesman for An Bord Pleanála said it hoped to issue a revised decision date this week. While the “considerable complexity” and length of the hearing “mitigates against an early decision” it was expected that the board would issue its decision within six to eight weeks he said.

A spokesman for Dublin Bus said it will continue to work with the council and the National Transport Authority (NTA) in relation to route alignments in the city. Concerns about potential air pollution risks of rerouting buses to other streets in the city dominated the three-week hearing.

The NTA had previously said its support for the traffic-free plaza was “contingent” on Dublin Bus being permitted to run two-way services on Parliament Street. However, in his closing statement to the hearing, NTA director of transport investment Hugh Creegan said it was prepared to drop this condition. The council said it had discounted two-way running on Parliament Street because of air pollution risks.

The plaza project, unveiled in November 2015, has been beset by delays. The council last May applied to the board for permission for its construction. The board had initially intended to make a decision on the application last November, before the Luas line began running through the city centre, but late last year revised the date to this month.